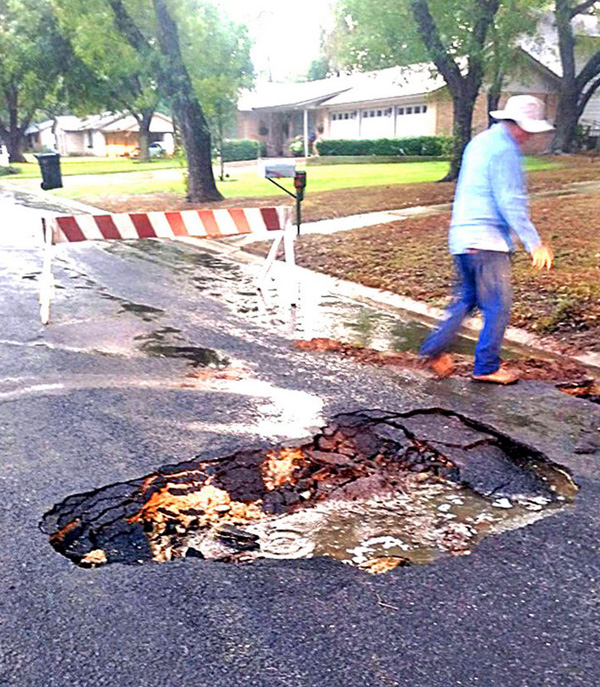 Another sink hole was discovered in Devine in the 200 block of Malone Street this past Wednesday morning, October 16. It had poured down in Devine the night before. The sink hole which developed under the asphalt was much larger than it originally appeared that morning.

“When one of our guys stepped on the asphalt around it, it actually caved in because it was hollow underneath the asphalt,” said Public Works Director Rob Flores.”It ended up being about 8 feet long x 4 feet wide at its widest point, which is about the size of a full sheet of plywood. Thankfully it was only about 1 1/2- 2 feet deep.”
Malone Street is located in the area of Devine Golf Course.
“It’s a really sandy area over there, so sometimes when you get a lot of rain in a short period of time like we did it just kind of moves the sand around and creates a void. We recorded about 4 inches in our rain gauge at Transportation Drive in Devine,” Flores adds.
This is the second large sink hole that’s developed underneath city streets in Devine recently.
“We sometimes run across little shovel-size sink holes, but this is only the second large sink hole that we’ve discovered in recent years. When we find sink holes like this we dig it out completely until we hit solid ground, and then fill it with base and pack it down. Then we lay asphalt on top.”
If you re-call, the other sink hole discovered in a city street was found on Harralton Circle on August 1. That sink hole on Harralton Circle was reportedly about 2 feet across and 4-5 feet deep. That one was somewhat of a mystery as there were no water leaks found in the area however there was moisture in the soil.
Prior to that, the last large sink hole that Flores can recall was years ago near the intersection of Ingram and Libold, which occurred due to a collapsed sewer line.