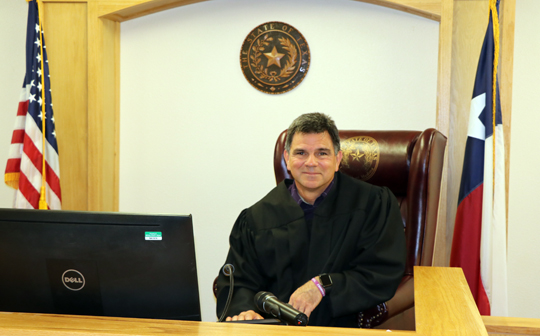 On Tuesday, December 21, 2021, the Presiding Judge Rex Emerson of the 198th District Court in Bandera County dismissed all charges brought against Tomas “Tommy” Ramirez III for alleged violations of the Texas Elections Code.
Tommy Ramirez, of Devine, expressed great relief that the matter has finally been resolved.
“This action brings an end to the vague charges for which I was indicted in February 2021. At the time, the specific charges alleged were unclear. The Attorney General was not able to elaborate on any specific acts which may have been violations of the Code,” Ramirez said in an email to The News this week.
“The Attorney General conducted an investigation that took a year, and their conclusions failed to find any probable cause of any law that I had violated,” Ramirez said. “My family and I have received anonymous hate mail and ugly social media attacks. My law office was vandalized and I was even asked if I wanted to voluntarily surrender my law license. I had been convicted in the eyes of the public without them having any idea that no evidence existed of any crime. It was a trying time for my family and me.”
Ramirez has resumed his JP duties to which he was elected during the March 2018 Republican Primary, and has already declared his intentions to seek re-election in the upcoming March 2022 Republican Primary Election.
“This was an odd case for several reasons,” Ramirez stated. “First, someone from Medina County contacted authorities in Austin to complain about a few irregular ballots in Devine. This resulted in the Attorney General sending not one but two staff members to investigate the matter even though this was not a high profile election, being a small race in a small county…Second, according to the report, one of the investigators from the Attorney General’s Office issued numerous subpoenas, reviewed the 11 ballots (which had been set aside and not counted in the total vote count) and multiple documents, and interviewed numerous witnesses. The investigators failed to find any probable cause that I violated any election laws. In the normal world void of politics, the lack of probable cause of a crime would never lead to a prosecution.”
If you re-call, in February 2021, Ramirez was indicted of Engaging in Election Fraud, Unlawful Possession of ballots/ballot envelopes, and Unlawfully Assisting Voting by Mail.

Ramirez further stated, “The indictment process is a one-sided matter where the accused is not allowed to be present or to have representation; it is a process involving only the grand jury panel and the prosecutors.…An indictment is not a finding of any guilt; it is only the formal process of accusing a person of a crime.”
Ramirez stated, “I knocked on about 90% of the homes in Precinct 4 during the election to leave literature, introduce myself and ask for their vote including any assisted living homes on the routes. I wanted people to be informed and know who I am and what I stand for. One of the things I was told that drew attention at the elections office in the beginning was that 11 ballots from an assisted living home had signatures that didn’t exactly match up to the ones on the request for mail in ballots. So they threw those 11 out. Turns out they all also voted for me, but were thrown out and they didn’t get counted in the election anyways. I doubt anyone else even took the time to stop by and visit with the folks, so of course I may have been the only candidate they knew.”
He adds, “They have never shown us any evidence this whole time that showed I broke any laws. And we asked for it multiple times. I just can’t believe it was dragged out so long. They sent multiple investigators to question people, and nothing turned up. Some stories even changed each time people were interviewed.”
Frustrated at how long this case has lingered on, Ramirez stated, “Prosecutors never sought to bring the case into court. Up to the time this case was dismissed, the Attorney General never sought to bring me into court at any time. This failure to advance the prosecution was highly unusual. The same is also true of Balderrama, Garza, and Martinez. None have been brought into court since the indictments were obtained.”
Three local supporters from Devine, Mary Jane Balderrama, Leonor Garza and Eva Martinez, were also indicted of election charges in February, and Ramirez hopes their cases will be reviewed soon.
“I am confident the women committed no crime, and that their cases will also be dismissed,” Ramirez said.
The JP 4 office hours will be changing as he takes office again.
“I am happy to be back in the office he said on Monday. And as I promised the voters, this office will go back to being open 8 to 5 Monday through Friday for business, as many only have time to run errands during their lunch hour. Since we have 4 staff members in the office this is easy to accommodate and important to offer,” JP 4 Ramirez said.
By Kathleen Calame
Publisher