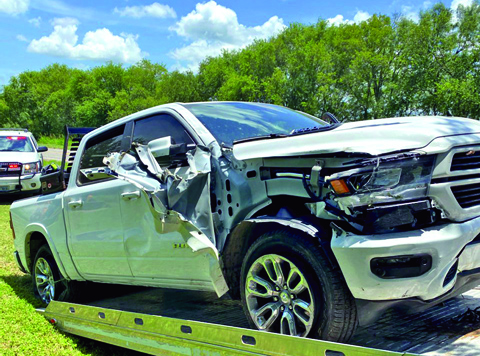 It was anything but a quiet Sunday afternoon, this past July 18th. While helping with several big pursuits of undocumented immigrants in Frio County, DPS Aircraft noticed a vehicle located in some very thick brush on a property between Yancey and Moore off FM 472…..Medina County Sheriff’s department investigated, and discovered it was a brand new, stolen truck that had been ditched, most likely by undocumented immigrants in a pursuit weeks ago.
“The landowner came home to a busted fence weeks ago, and he repaired the fence, thinking that the vehicle had backed out and drove off,” Sheriff Randy Brown said.
But apparently it had traveled so deep into brush, so thick, that it took an aircraft to notice it.
These pursuits are taking up hours and hours of local law enforcement officer’s time.

“It’s an everyday thing,” Sheriff Brown said frustrated, “An everyday thing.”
Just last night, Sunday, July 18, Medina County deputies took five more undocumented immigrants into custody. Today, they are back at the scene of the stolen vehicle, with their latest task, bringing in heavy machinery to cut a road to get the stolen vehicle back out.
Frio County Sheriff Mike Morse stated there were actually four pursuits that happened the day that they had called in the aircraft. At least one of the smugglers was captured and arrested. Most of these pursuits originated close to Pearsall, and speeds reached up to 100 MPH.
In a press conference on Tuesday, July 20th, local Congressman Tony Gonzales stated, “Traditionally during the summer – the hottest months of the year – immigration flows go down, but that has not happened. Numbers have only increased. We have seen almost 190,000 illegal apprehensions for the month of June and that number continues to rise. In Del Rio, yesterday, there were hundreds of migrants from Haiti, Cuba, Venezuela, that were rushing to get in. The crisis has come to a boiling point.”