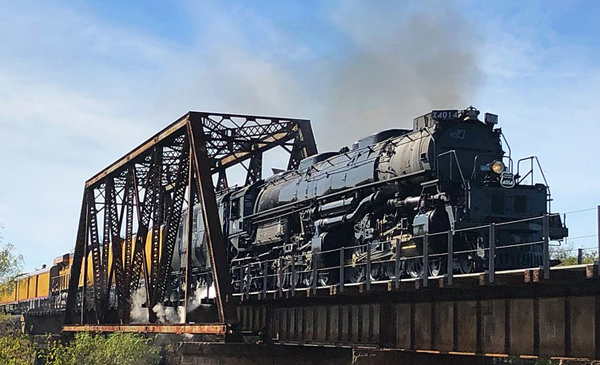 People from all over the USA gathered in Medina County to watch this piece of history chug across the Hondo Creek bridge at Hwy 90 this past Monday around 2:30 pm. The steam engine, built in 1941, was taken out of a museum and restored to make a monumental cross country journey.

“When I heard it was coming I went to this bridge and I thought I’d be the only one there, but there must have been 50 people there from all over the USA taking pictures and videos! Many of them had been following this train since it started its route,” said James Tomey of Hondo.
When asked how different this steam engine is from the trains we see every day, Tomey said “This one was alive…whistling, spitting, and roaring. It was a really neat thing to see.”
The Great Race Across the Southwest Celebrates the 150th Anniversary of the Transcontinental Railroad’s Completion
The Big Boy No. 4014 has been riding the rails on the Union Pacific system, taking it through Arkansas, Arizona, California, Colorado, Kansas, Missouri, Nevada, New Mexico, Oklahoma, Texas, Utah and Wyoming.
Union Pacific’s historic Big Boy steam locomotive No. 4014 has been touring the Union Pacific system throughout 2019 to commemorate the transcontinental railroad’s 150th anniversary.
The Big Boy’s return to the rails is the product of more than two years of meticulous restoration work by the Union Pacific Steam Team. No. 4014 is the world’s only operating Big Boy locomotive, according to Union Pacific.
About the Big Boy No. 4014
According to Up.com, twenty-five Big Boys were built exclusively for Union Pacific Railroad, the first of which was delivered in 1941. The locomotives were 132 feet long and weighed 1.2 million pounds. Because of their great length, the frames of the Big Boys were “hinged,” or articulated, to allow them to negotiate curves. They had a 4-8-8-4 wheel arrangement, which meant they had four wheels on the leading set of “pilot” wheels which guided the engine, eight drivers, another set of eight drivers, and four wheels following which supported the rear of the locomotive. The massive engines normally operated between Ogden, Utah, and Cheyenne, Wyo.
There are seven Big Boys on public display in various cities around the country. They can be found in St. Louis, Missouri; Dallas, Texas; Omaha, Nebraska; Denver, Colorado; Scranton, Pennsylvania; Green Bay, Wisconsin; and Cheyenne, Wyoming.

Big Boy No. 4014 was delivered to Union Pacific in December 1941. The locomotive was retired in December 1961, having traveled 1,031,205 miles in its 20 years in service. Union Pacific reacquired No. 4014 from the Rail Giants Museum in Pomona, California, in 2013, and relocated it back to Cheyenne to begin a multi-year restoration process. It returned to service in May 2019 to celebrate the 150th Anniversary of the Transcontinental Railroad’s Completion.
A schedule of upcoming routes can be seen online at up.com. On Wednesday, November 6, the train was planning to depart from San Antonio at 8 am and head toward Luling, Flatonia, Eagle Lake, and then Houston with an eta of 7:00 pm.
Wednesday, November 6
San Antonio, Texas
Sunset Station
1188 E Commerce St. Depart 8:00 a.m. CT
Luling, Texas
E. Davis St. & Pecan Ave. Arrival
Depart 10:00 a.m. CT
10:30 a.m. CT
Flatonia, Texas
422 W Main St N. Arrival
Depart 11:45 a.m. CT
Noon CT
Eagle Lake, Texas
McCarty Ave. Crossing Arrival
Depart 2:00 p.m. CT
2:30 p.m. CT
Houston, Texas
902 Washington Avenue Arrival 7:00 p.m. CT