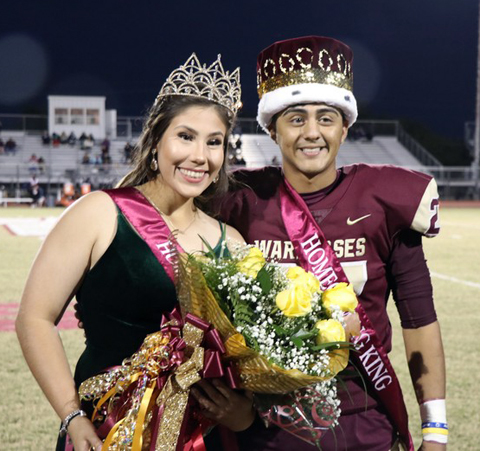 Homecoming Queen Isabella Gutierrez and King Leonard Pompa were crowned at this week’s homecoming football game. The following students were nominated to the Homecoming Court consisting of Class Representatives for 9th, 10th , 11th, and 12th grades.
Devine High School students voted to determine the court representatives; one girl and one boy from the, and four girls and four boys from the senior class. They then elected one senior candidate as this year’s Homecoming Queen and Homecoming King.
Presenting the flowers to this year’s court, and crowning the new Homecoming King and Queen were the 2018 Homecoming Queen, Sailey Sanchez and King, Ralph Rios, with the assistance of the Devine Warhorse Cheerleaders.
Freshman Representative Raynee Allen is the daughter of Ben and Mandy Allen. Raynee is a member of the UIL team and a member of the debate team. She is also involved in FCCLA. Last year, Raynee was honored to receive 4 separate “Most Outstanding Student of the Year” awards, and also received the President’s Award.Upon graduation, Raynee would like to study law at Texas A&M University, and eventually realize her dream of being a prosecuting attorney.
Freshman Representative Blain Davis is the son of Chris and Kari Davis, and a 3rd generation Devine student. Blain is a member of the Freshman football team, FFA, and serves as the Student Council Representative for the Freshman Class. He also participates in track in the spring. After high school, Blain would like to attend Texas State University in San Marcos, where he will study to become a game warden.

Representing the Sophomore Class is Macey Hein. Macey is the daughter of Garret & Lora Hein. Macey is president of the Sophomore class, and is a member of the Student Council. She is the setter for Arabian Volleyball team, and is a member of the Varsity basketball and track teams. Macey also plays on an AAU club basketball team year-round. Macey hopes to further her career playing basketball for Baylor, where she will major in Business Management.
Also representing the Sophomore Class is Xavier Contreras, son of Art and Stella Contreras. Xavier is a straight-A student, a member of the Warhorse football team and participates in FFA. He is working toward making the Varsity basketball and pole vault team. He also enjoys serving as a referee for Devine Youth Sports, and helping out with the Devine and Natalia Little League program. After graduation, Xavier plans to attend college and major in radiology.
Junior Representative Allyson Taylor is the daughter of Scott and Nikki Taylor. Ally is a member of the Arabian varsity basketball team, and is the catcher for the varsity softball team, as well as 16U Texas Bomber select team. Ally is treasurer for the Junior class, and also serves as treasurer for the Student Council. Ally is a member of the yearbook staff. She is a member of the National Honor Society. Ally hopes to play softball at the college level, and would ultimately like to attend the University of Texas at Austin to study for her dream job as a pediatrician.
Representing the Junior class is Xavier Garza. Xavier is the son of Monica Ybanez and Alan Garza. Xavier is a member of the Devine Cross Country team, and recently qualified for the state meet in Austin. Xavier would like to go to college and study kinesiology in his quest to become a chiropractor.
Representing the Senior Class is Isabella Gutierrez, daughter of Roger and Josie Gutierrez. Isabella is the treasurer for the Class of 2020, is a member of National Honor Society, manager for the Arabian Volleyball team, producer for Broadcast Journalism, and is part of the Powerlifting and Softball teams. After high school, Isabella plans to continue her softball career while majoring in Nursing, with the ultimate goal of becoming a pediatric nurse.
Senior Class Representative Joseph Hernandez is the son of Richard Hernandez and Jennifer Martinez. Joseph is a member of the Warhorse football, track and powerlifting teams, and is a member of the National Honor Society. He also enjoys volunteering for Mission Devine. After high school, Joseph hopes to attend college at the University of Texas at Austin, or St. Mary’s University to pursue a law degree.
Senior Veronica Rae Silva is the daughter of Daniel and Lupe Silva. Veronica is a member of the National Honor Society, and serves this year as DHS’ own Willie the Warhorse. She plans to join the United States Navy and become a military police officer.
Senior class representative Anthony Limon is the son of Cecilio Limon and Maria Limon. Anthony is the section leader of the tuba section for the Warhorse Band. He is a member of the UIL Current Events team, where he received 1st place as an individual and as a team, and advanced to regionals. He is part of the state-qualifying robotics team as part of the marketing and exhibit team. Anthony has been accepted to West Texas A&M, where he plans to obtain his Bachelor of Science in Nursing, with a specialty in cardiology.

Also representing the Senior Class is Hannah Michelle Stolzman. Hannah is the daughter of Robert Stolzman and the late Bonnie Stolzman. Hannah serves as the President of Youth Alive, is Historian for Student Council, is the Student Council representative for National Honor Society and the Senior class, is the Quartermaster and Librarian for the Warhorse Band, and participates in band and athletics. Hannah plans to attend Texas A&M in College station to earn a Bachelor degree in management.
Senior Isaiah Oropeza is the son of Bart and Julie Oropeza. Isaiah is a three-year member of the Varsity Warhorse football team, and four-year member of the varsity track and baseball teams. Isaiah is a member of the National Honor Society, and the state-qualifying UIL Robotics team, which placed second at the San Antonio BEST robotics competition. Isaiah has been accepted to Texas A&M University at college station where he will pursue a degree in electrical engineering.
Janaee Wofford, Senior Class Representative, is the daughter of John and Desta Wofford. Janaee is a member of the Devine varsity softball, volleyball and basketball teams. Janaee would like to attend the Paul Mitchell School of cosmetology upon graduation from DHS, and plans to have a career as a cosmetologist.
Senior Leonard Pompa is the son of Leonard and Esmeralda Pompa. Leonard is a member of the Varsity Football and basketball teams. After high school, Leonard plans to attend Texas State University, where he will study to become a game warden.