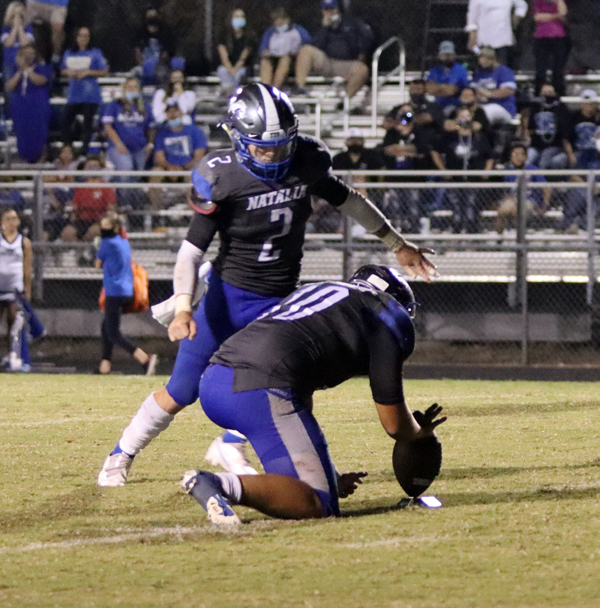 The George West Longhorns came into Natalia expecting a much different outcome last Friday night, as nearly every poll and picker in the state had the Live Oak County district favorite squad winning big.
The Mustangs of Natalia came out and showed early, they would not be fazed by the hype of their opponent, as the Stangs truly out-played the other boys in blue from start to finish in every aspect of the game. The final minute and a half in Natalia would be one for the memory books, as Natalia secured one of their top upset wins in the history of Natalia Football!.
The Natalia Mustangs stalled out during a crucial offensive drive and punted to heavy favorite George West with 1:30 to go in a thrilling ball game last Friday night in Natalia.
George West got the ball at their own 20 yard line with 1:23 to go as the game was tied 28-28. The Horns handed the ball off to one of their top backs who Natalia had kept in check all night long. As Michael Upton ran the ball around the right side of the field, Natalia defender Manuel Garcia knocked the ball out and Dustin Soto recovered the HUGE fumble. Natalia took over at the George West 22 yard line with 1:23 to go in the game.
Wyatt Woodson took the first snap of the final drive and ran for 7-yards, before watching Elijah Banda with a great game 3 yard run then a George West called a time-out. Out of the time-out, Woodson ran for 4 more yards down to the GW 12 yard line before watching Banda run down to the GW 4 yard line with just 11 seconds to go in the game. Natalia called a time-out, followed by GW calling a time-out. When play returned, Natalia opted to go for the touchdown, but QB Woodson was taken down for a loss of 4 yards back to the GW 8 yard line with just 4 seconds to go as Natalia called a time-out.
When they returned, Natalia lined-up for the biggest kick since Micah Fenwicks 2002 vs Nixon-Smiley in the Bi-District Playoffs.
Just like Fenwick, Woodson put up a high ball that stayed just inside of the left goal post as the buzzer sounded. Natalia had knocked off the #21 state ranked George West Longhorns 31-28 in one of the biggest wins in program history with all things considered. This kick was also KSAT-12’s “Play of the Week.”
“I thought that our kids played a very physical football game,” Natalia Head Coach Ilyan Martinez said. “Our coaches had them ready to play and they didn’t disappoint. I am proud of our team for coming back to win a tough game against a good George West team, after a tough loss the week prior. It says a lot about who we are becoming as a team.”
The game was a true testament that showcased a great game plan by the coaching staff and great execution on the offensive and defensive side of the ball. Coming into the game, the staff had stated George West had one of the better secondary’s they would face which allowed Natalia to turn to their running game.
Natalia used a three-headed monster at Mustang Stadium as they rushed 57 times for 322 yards led by Wyatt Woodson (23-133), Elijah Banda (21-100) and Adrian Vasquez (13-89).
After watching both squads stall out on their first offensive possessions of the game, Natalia got things rolling on drive #2. Natalia used a heavy dose of Banda, Woodson and Vasquez as the Stangs drove 68 yards down field on six plays. Natalia scored on the 6th play courtesy of Banda breaking loose up the middle from tacklers en route for the first touchdown of the game with 3:09 to go in the opening quarter. The PAT was up and good by Woodson.
Coming into the game, Natalia knew GW had two very talented backs they would be challenged with slowing down. The Stangs defense did their job when it came to slowing down their rushing game, as Devon Jackson the GW QB led with 47 for the game on 12 carries as no other back had over 30 yards in the game holding GW to 121 total rushing yards in the game.

On the second drive of the game for the Horns, they used a ton of clock to march downfield 78 yards on a 13 play drive. GW was able to score as Jackson found Jake Snider on a 12 yard pass on a 3rd down and 2 play at the Natalia 12 yard line. The P{AT failed, as the Stangs led 7-6 with 9:54 to go in the opening quarter.
Natalia got the ball back at the GW 40 yard line. Natalia used six straight run plays by Banda, Woodson and Vasquez to get down field quickly setting up a 2nd down and 7 at the GW 7 yard line. Natalia’s A. Vasquez showed off his wheels, breaking outside for a 7 yard touchdown. The PAT was good, giving Natalia a 14-6 lead with 7:51 yard line.
On the ensuing kickoff, Natalia had a big breakdown in special teams as Michael Upton showed off his speed returning the kickoff for 91 yards and a GW touchdown. They opted to go for the 2pt try and John Zuniga was in to tie things 14-14 with 7:36 to go in the 1st half.
Natalia stalled out offensively on their next drive, as GW got the ball back at the Natalia 49 yard line. Jackson launched a long ball down field, as Natalia simply couldn’t make the defensive play as Jackson found Snider for a 49 yard touchdown. The PAT by Riley Huie was good, as the Horns had stormed back to take a 21-14 lead with 5:35 to go.
Natalia got the football back with 5:35 to go at their own 40 yard line. During this drive, Natalia had their biggest pass play on play #2 of the drive as Woodson found Enrique DeOsio for an 11 yard play. From here on out, Woodson, Vasquez and Banda continued to do what they did all night and that was run hard behind an offensive line that truly out-played a good GW line. Woodson was able to score on the 12th play of the drive from 3 yards out. The PAT was good again, as Natalia tied the game 21-21 with 33 seconds to go. This is how the first half would end.
GW received to begin the second half of the game and began their drive at the Natalia 42 yard line. GW used seven plays to march down to the Natalia 17 yard line. GW attempted a huge 4th down and 9 pass to Snider again, but Natalia D held them just short of getting the 1st down.
Natalia took over at their own 11 yard line. Banda, Woodson and Vasquez did their job again including a touchdown called back by Vasquez. The biggest play during this eight play drive was a 47 yard run by Woodson taking Natalia down to the GW 30. A. Vasquez was able to score on the 8th play of the drive, from 9 yards out. The PAT was good, giving Natalia a 28-21 lead with 5:54 to go in the 3rd quarter.
On the ensuing drive, Natalia held GW and got the ball back with a chance to put the game away, but a fumble on the 6th play of the drive gave GW back the ball.
GW used ten plays to march 60 yards down field before scoring on a crazy catch by Jake Snider with 3 defenders in his face. After capping off the 3rd and 16 play, the PAT was good by GW as they tied things at 28-28 which led to the final big finish mentioned at the start of the article.
Following the huge field goal by Woodson as time expired, Natalia dog-piled the kicker, holder and snapper in the middle of the field as the celebration began in Mustang Country.
“We felt like we could run the ball and our offensive line was dominant and our backs ran the ball effectively,” Martinez said. “Our coaches did a great job of preparing a game plan to help us be successful.”
Final Offensive #s: The Natalia Mustangs ran 61 plays and accounted for 334 yards of offense that included 12 passing yards and 322 rushing. Passing, Natalia’s Woodson was 2-4-12 yards as Natalia rushed 57 times. George West had 6-48 yards in penalties as Natalia had 3-30 doing a much better job with being disciplined. Natalia accounted for 20 1st downs compared to 8 by GW. GW was 5-11 on 3rd downs as Natalia was 4-11.
Individual Yards: Rushing: Woodson 23-133-1TD, Banda 21-100-1TD, Vasquez 13-89-2 TDs. Receiving: DeOsio 1-11, A. Vasquez 1-1.
Defensive Stat Leaders: Assists: Isaac Rios 6, A. Vasquez 6, Jake Navarro 6, M. Garcia 5, Gaylen Garcia 4, Devin Perez 4. Solo Tackles: M. Garcia 6, Dustin Soto 4, Gavin Martinez 4, D. Perez 4. Tackles for a loss: M. Garcia 2. QB hurries: Rios 4, Perez 4, Garcia 3, Soto 2. Caused Fumble: Garcia 1. Fumble Recovery: Soto 1.
Coach Martinez comments:
Coach Martinez was asked his thoughts on the Natalia defense when it came to slowing down their running game. “I thought our defense played well,” Martinez said. “We have to clean up some things in the secondary, but I was really happy with how physical we played. Our staff did a good job putting together a plan to account for the different looks we would see. They have some really good ball players and I thought our defense was up for the challenge.”
Coach Martinez was asked if he felt this was the biggest win during his staffs era in Natalia: “Not too sure about that. I’m sure I will have plenty of time down the road to ponder that, I am just grateful to be playing ball and really proud of our kids and coaches.”
Upcoming Game: The Natalia Mustangs travel to the Coastal Bend on Friday to battle the Odem Scrappin Owls in a rare non-district battle. See the preview story for more details.
By Eric Smith
Staff Writer