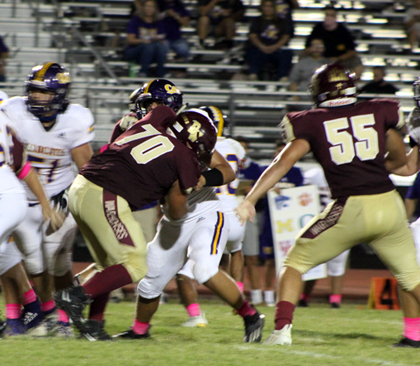 The Devine Warhorses walloped the Carrizo Springs Wildcats 63-21 last Friday night at Warhorse Stadium. The homecoming crowd saw Carrizo keeping it a little too close in the first half as the Wildcats were only down a touchdown with five minutes remaining in the second quarter.
The Horses put the pedal to the medal the rest of the way outscoring Carrizo Springs 35-0 from that point forward. The win puts Devine at 1-0 in district with a big ballgame against Hondo coming up on Friday.
“Big win to start off district play vs Carrizo Springs,” Head Coach Paul Gomez began his weekly briefing. “We started out rusty and slow coming off of our open week with too many fumbles, turnovers and missed assignments early on. We did much better in the second half.”
Much better indeed. Especially on the defensive side of the ball.
“Defensively we had some big sacks and created some turnovers!” Gomez continued. “We just didn’t start out playing with much emotion or focus. Our main goal this week was to keep the players focused on the task at hand and practice with great energy and intensity. I think human nature got to some of us a bit because of the next game against Hondo coming.”
It’s human nature to look down the schedule and see the Battle of the Creek Bowl as the next game. Sometimes players forget temporarily about the task at hand, which happened to be Carrizo at the moment.
“It was a great lesson learned. A team has to play it day by day, game by game and keep climbing that ladder. We have got to continue to improve every day and players have got to keep putting the team first. It’s not about who gets the most carries or catches or who gets the most reps, it’s about what is best for the team at that point. That’s what has made this team special, the fact that they are very unselfish. They don’t care who gets the ball, they just want to win.”
Game flow
For as hard as it is to believe once you see the 63-21 final score, Devine was actually behind in this game at one point as Carrizo scored on its first possession of the game on a 7-yard run.
Devine’s Buddy Santos quickly knotted the score at 7 apiece with a 3-yard run three minutes later. The Warhorses piled it on for a bit looking like they were going to run away with the victory.
Justin Contreras returned an interception 46-yards for a score, then Santos touched the end zone on a one-yard run soon thereafter. Contreras notched his second touchdown of the half with a 63-yard run that put Devine up 28-7 with 0:12 still to go in the first half.
This is where Carrizo Springs began to make a little noise in their side of the scoring column. Two consecutive touchdowns pulled the Wildcats to within seven at 28-21. That was the last whiff of a possible upset the Wildcats would sniff however.
Santos and Contreras would each score again with Marcus Rodriguez and Christian Gerlach sandwiching in fumble returns for touchdowns in between their scores. Mason Burford’s 56-yard reception from Jaiden Burford put the finishing touches on Devine’s 63-point outburst.
“D” scores 3
Devine’s defense scored three touchdowns on the night, but looks to shore some things up during practice this week. The Horses cannot afford to start slow.
Defensive Coordinator George Villa believes his unit was “shaky to start off with against Carrizo. We looked really slow footed at times. Our effort was there though. We definitely have to clean it up for this week!! We were very pleased with the 3 defensive TD’s!! That’s always big!!”
Coach speak
Coach Scott Taylor got outstanding play from his defensive end group. Christian Gerlach had 6½ tackles, 5 of which were for losses and included one sack.
“Christian had a scoop and score of a fumble caused by Justin Contreras,” Taylor said. “Jared Fernandez had 5½ tackles and played well all night. Kannon Ramirez and Aiden Zapata both had 1½ tackles. As a group we were in on 15 tackles throughout the night.”
Taylor is also the Warhorse Special Teams coach. Kicker Jacob Featherly did not miss an extra point attempt, going a perfect 9 for 9.
Offensive and defensive line coach Devin Rotramel commented that both of groups “graded out the best they have all year.”
Welcome back, Part 1
Gomez was more than happy with his entire ball club but made a point to single out a couple of players that were making their return, and two others that continue to grind week in and week out.
“Glad to see seniors Xsavior Martinez and Justin Contreras back on the field and playing. They both made some big plays for us the other night! Both of those young men have definitely paid their dues these last few years and it’s just a great thing that they are able to play and contribute their final district season. Mason Burford had a great touchdown catch and run on a slip screen with great blocking in front of him. Brady Hackebeil did a great job running the ball and making some good throws. Brady is as unselfish as they come. He doesn’t care how many times he runs or throws the ball, he just wants to win. But he can take over a game with his skills if he needs to! Great attributes of a leader! When you have players that put the team first then you can have success and that is why we are where we are today. Our kids are family.”
By Jerel Beaty
Staff Writer