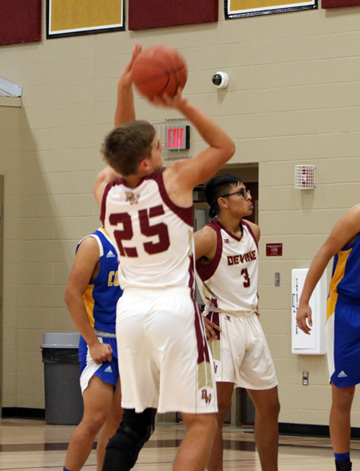 Playing in two games last week, the Warhorses earned their first win of the season when they faced Ingram Tom Moore. They also played Marion and are now 1-3 for the season. “We are learning about ourselves these early games. We need to improve our free throw percentage and our defensive rotations. We now enter tournament season and are excited to play a lot of games the next two weeks,” said Coach Evan Eads.
Facing Ingram on Monday, the Varsity Warhorses started off sluggish in the first and were outscored 6-11. They turned the game around and were up 18-13 by half time. The third quarter was close but the Warhorses kept their lead and maintained it in the fourth to win it 40-32.
Marcus Espinosa 1, Sage Cruz 6, Caden Hanson 15, Hayden Dubose 4, Chris Ortiz 1, Kaiveri Alverez 10, Peyton Carr 1, and Xavier Contreras 2. Q1 6-11, Q2 13-18, Q3 29-21, Q4 40-32.
In their second game of the week, the Warhorses faced Marion and it was a tough loss at 27-78. Marion was able to control the pace of the game and the Warhorses played hard to keep up. It was a great learning experience early in the season for the Warhorses.
Espinosa 4, Cruz 4, Hanson 5, Ortiz 2, Alverez 2, Carr 1, Contreras 9. Q1 10-22, Q2 14-41, Q3 22-66, Q4 27-78.
The Warhorses will head to their first tournament of the season at Marion this weekend. Tuesday December 7th they will take on Hondo at home. This will be a game to not miss!
By Dicy Chambers
Sports Writer