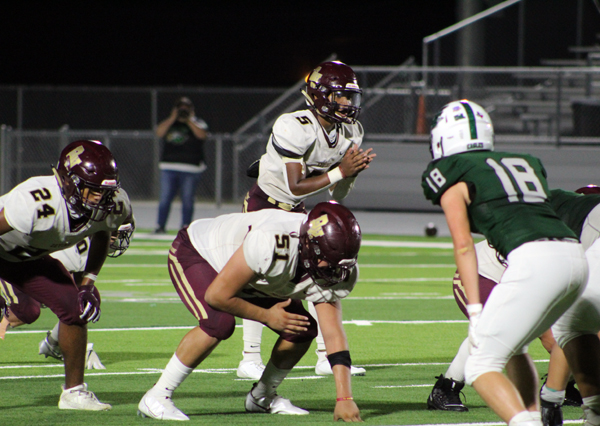 The Devine-Luling matchup last Friday was not quite the nail-biter that the UT-Texas Tech game was on Saturday or even the Cowboys-Seahawks game on Sunday. Instead, the Horses jumped out to a lead early in the game and kept the throttle down until it was no longer a contest.
The Warhorses 49-0 shellacking of the Eagles gave Devine its fourth straight victory, and a lot of confidence going into district-play two weeks from now.
“It was a great win for us on Friday as we had a great overall game,” Head Coach Paul Gomez began his weekly analysis. “Our offense put 49 points on the board, our defense shut them out, and our special teams had its best night to date!”
Gomez starting off complimenting all three phases of football has to tell you that he is extremely pleased with all aspects of the Warhorses Friday night domination.
Even though he mentioned ‘special teams’ after offense and defense, he chose to mention a couple of the special team players first.
“Hayden Dubose’s kickoff return for a touchdown was awesome and Jacob Featherly was 7-7 on extra points!” Gomez stated.
Devine also allowed the officials to keep that yellow flag tucked nicely away in their pants most of the night saying, “We reduced the penalties that we committed so it was a very good all-around game for us!”
Having the whole team contribute to a victory does wonders for everyone’s moral. Not all players are guaranteed playing time simply because they dress out every day. It is a great feeling to get everyone reps so when they are needed down the line they will have that game experience under their belt. That could be a factor as the Warhorses begin their yearly district championship run.
“Our second-team guys played the whole second half, which they deserve,” Gomez commented. “Those guys practice just as much as our starters so it was good to see them get some game experience.”
Offensively, 49-points and only one punt to mention, Gomez said offensive coordinator Coach PJ Wells “called a great game and we were really balanced offensively with 271 rushing yards and 152 passing. That is about as balanced as we are going to get considering we are a running team. We are executing well right now and everyone is on the same page.”
Pitching a shutout almost guarantees that team will win, as well. Defensive Coordinator George Villa’s unit was stingy with the yards Friday. A fact that did not go unnoticed by Gomez.
“Defensively we came out and did some really good things!” stated Gomez about Villa’s efforts. “We didn’t allow any points for the first time this year so that was a great accomplishment. Coach Villa has the defense aggressive and confident in what they are doing and it’s showing on the field.”
It is not that Luling was without talent. It is that the Horses played tirelessly and played to keep the shutout intact.
“They had a really good dual threat quarterback that was tough to contain,” Gomez said about the Eagle skill position player. “We did allow some big plays that we have to fix but for the most part we played aggressive and tackled very well. Defense is all about effort and discipline and our players have bought in. We are bringing it in practice and it is transferring to the games.”
No points surrendered definitely shows that practice habits are showing up at game time.
“The players are buying in and our energy and focus in practice this last week was the best it’s been this year. Our guys know that is what will give you the best chance to be successful on Friday. When you have players that are having fun at practice and bringing lots of energy every day, that makes coaching fun! They are not just trying to get through practice, they are out there excited to get better and it is showing on Game Day. I’m proud of our senior leadership!” Gomez concluded.

Game flow
The Horses did not waste much time putting their stamp on the game after forcing a Luling punt on the Eagle’s first possession. At the 8:22 mark of the first quarter, quarterback Brady Hackebeil hit Aiden Zapata in stride up Devine’s sideline. Zapata took it to the house to give them a quick 7-0 lead.
The throw and catch was perfectly executed as Hackebeil let it fly from his own 19-yard line and the ball landed softly in Zapata’s hands at the 45. Zapata went untouched the rest of the way with a nice little escort from teammate Christian Gerlach.
Marcus Rodriguez tacked on a touchdown almost two minutes later with a 4-yard run. Devine now led 14-0.
This score came after another Eagle punt and a nice return by Mason Burford. Buddy Santos broke loose for a 30+ yard gain to take the ball well into Luling territory at the 27. A couple of runs later, Rodriguez burst in the end zone for his first score on the season.
Buddy Santos, he of the now 10 rushing touchdowns on the season, crossed the goal line with 2:13 still to go in the first quarter. His score gave the Horses a 21-0 lead at the end of the first quarter of play.
Devine’s defense forced yet another Eagle punt and Mason once again had a decent return. Five players later, Buddy took the handoff from a spinning Hackebeil, avoided being tackled by a couple of ankle-grabbers and plowed into the end zone for the score.
At the 8:20 mark of the second, Hackebeil threw his second touchdown pass of the game. This one found Mason Burford from the 17-yard line and increased Devine’s lead to 28-0.
Hackebeil helped set up this touchdown with a 34-yard run early in the possession. Burford, who bobbled the catch slightly, kept focus to make the grab and sprinted into the end zone between two Eagle defenders.
The last score before halftime came courtesy of a Jaiden Burford rollout to his left pass to Nate Ramirez who was in the back left corner of the end zone to complete the 12-yard pass with 0:30 seconds to go in the second quarter. The TD throw was Jaiden’s first on the season, and the TD reception was Nate’s first of the season as well. Devine had a more-than-comfortable 35-point lead at the break.
Devine’s Colin Dishman forced a fumble and fellow Warhorse Haydn Brumage was there to trounce on the ball for the recovery. Jaiden, who had taken over quarterback duties for Brady, hit Mason on a long pass play that eventually set up Nate’s touchdown.
Jaiden dropped back to pass at the Luling 38 and threw a strike to Mason who was streaking up the left hash marks. Mason hauled in the reception near the Warhorse 30 yard line. Mason carried a slew of Eagles down to the 15-yard line.
Devine scored twice in the third quarter. Hayden DuBose returned the second half kickoff 85-yards for a score with only 17-seconds coming off the clock. The Horses led 42-0.
Luling kicked off from the middle of their 40-yard line. When the ball landed, it bounced a few times before Hayden picked it up at the 15, nearly out of bounds. Hayden avoided an Eagle tackler at the 10 with a 360-degree spin then simply sprinted harder and faster than anyone else who was chasing him the rest of the way. He took it to the house using the lane between the Luling sideline and their nearest hash.
The last touchdown of the night came on an Ethan Santos 7-yard run with 5 minutes to go in the third quarter.
Ethan’s score was set up by a Nate Ramirez interception. The left-handed Eagle quarterback got flushed out of the pocket to his right. A non-brisk pass let Nate step in between to Luling players to get his first pick of the season.
Ethan’s score along with Jacob Featherly’s seventh consecutive point after attempt put the finishing touches on the 49-point whitewash of the Eagles.
By Jerel Beaty
Staff Writer