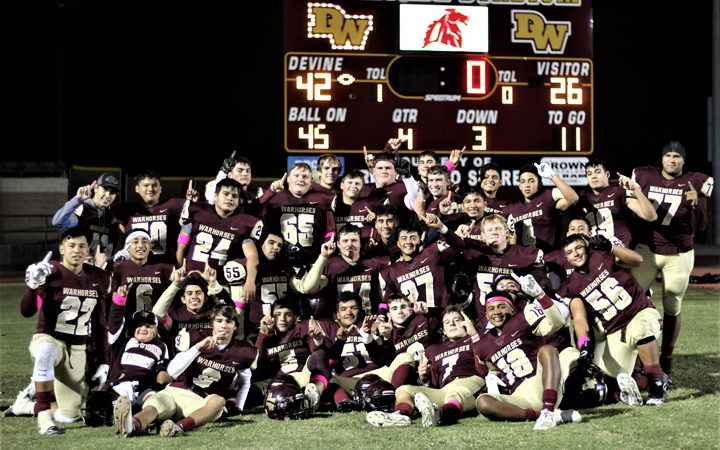 It finally felt like football weather Friday night at Warhorse Stadium. Temperatures in the mid-50s made it feel as though autumn had finally arrived. Devine’s rushing game also arrived—in a BIG way. The Horses rushed 53 times for 481 yards and six touchdowns to propel Devine to a district-opening 42-26 victory over the visiting Hondo Owls.
Devine pounded the Owls, running pretty much at will. Justin Contreras carried 19 times for 273 yards and two touchdowns while Buddy Santos, Leonard Pompa, Isaiah Oropeza, and Brady Hackebeil combined for another 208 yards and four touchdowns. Although only one game into district, games like this can propel a team to great heights.
“It was a great win for us,” Gomez understated. “Guys were ready to play and as physical as we’ve been all year. We had great intensity all week, especially on game-day. Offensively we were very physical. Our offensive line did a great job of winning the battle of the trenches and moving the pile.”
It did not take long for Devine to get it going in the right direction Friday. Two minutes into the game, the Horses scored on a 1-yard Leonard Pompa run. Although Hondo quickly struck back on a 65-yard completion for a score, Devine controlled this game from that moment onward.
Santos scored his first of his two first half touchdowns on a 2-yard run with 5:46 to go in the opening frame. He scored later on a 30-yard run with 3:43 to go before the half. Sandwiched between Santos’ scores was Contreras’ first touchdown on the night on a 19-yard run.
Devine took a commanding 31-7 lead into the halftime break. Although Hondo and Devine swapped touchdowns back and forth in the second half, this game was all in the Warhorse’s favor.
Contreras sprinted 75 yards for his second score with 3:43 left in the third while Pompa racked up his second touchdown on a 6-yard run with 2:17 left in the ballgame.
Hondo’s late touchdown made it look respectable at 42-26 but for those in attendance, this game was never in doubt.
“I never felt like they could stop us,” Gomez stated about the 523-yard offensive performance. “We obviously had to punt a couple of times due to mistakes that put ourselves in that situation. I am excited on where this offense currently is and, moving forward, we can get even better. We want to be our best at the end of the regular season, not at the beginning so I feel like we are getting to the point where we can start rolling offensively.”
Welcome back
Knock on wood but the Warhorses have not been decimated by injuries as has been the case the last couple of seasons. There are going to be bumps and bruises throughout the season and players will miss playing time from time to time, but so far, the Horses have been relatively healthy.
“It was good to have big John Schnautz back at right tackle,” Gomez said. “We were able to move Isaiah Rejino to left guard since he has good feet and quickness and I think it made us better.”
Devine is big up front, it just has not looked like it with the 6-A competition that the Horses faced during pre-district. Playing on a level playing field against schools of same enrollment should do the Warhorses good as they move through District 29-4A competition.

Level playing field?
According to Dave Campbell’s Football Magazine, Devine’s 2019 pre-district opponents reported the following enrollments: SA Kennedy 1,187, Somerset 1,179, SA Legacy 2,083, Pleasanton 1,010, and Central Catholic 1,049 (Googled).
For the first five games, the Warhorses were facing schools that averaged 1,302 students. That 694 difference is a huge factor when speaking of “level playing fields”.
Hondo’s enrollment shows 634, while the remaining district schedule of Crystal City (524), Pearsall (668), Poteet (516), and Carrizo Springs (632) averages to 594. Devine’s reported number of 608 levels things out competitively.
Unsung hero
Gomez continued to heap praise on his team’s running backs but he wanted to give praise to a back that did not account for even one rushing yard on his own.
“Man, all of our backs ran hard including our quarterbacks. Justin ran possessed! He was running over people and then out-running them. Buddy Santos and Leonard Pompa had some big tough runs for us as well.
However, our unsung hero is Sergio Martinez. He did not have any carries but he was the best blocking back by far. He is our unsung hero because he made the critical blocks to spring our big run plays.”
It speaks volumes about the unselfishness among the players on this team as well. “Everyone has established their niche in the offense and we do have many weapons. These kids do not care who gets the ball. They just play hard.
Nice catch
Forty-two yards through the air is a stat not usually bragged about in big-town newspapers, which is another reason why it is nice to live in this small town. Being able to root for homegrown players and to celebrate and recognize kids for good efforts does happen everywhere.
“Mason Burford made a great catch right before half to give us a shot for the end zone,” Gomez said of his leading receiver on the season. “He went up between two defenders to catch the ball.”
The ball did not look like it had a prayer of being caught. Mason’s great concentration and desire to outperform the two Owl defenders while the ball was still hanging in the air allowed him to make that catch.
Coach speak
“Xsavior Martinez had a great night in the secondary. He had four pass break ups and one interception. He also had two tackles.”—Secondary coach Heath Poppe
“The linebackers were ready for the Hondo game and it showed. All three gave 100% every rep. Sergio Martinez had two solo tackles, two tackles for loss, and a forced fumble. Hunter “Murph Dog” Maxwell recorded four assists and two tackles. Devon Ornelas rushed the QB effectively in the fourth. It’s fun coaching these kids.”—Linebacker coach Evan Eads
“Our offensive line did a great job of blocking and the backs did a good job of hitting the holes. We made plays when we needed to and got many big first downs. We only had one turnover and very few penalties.”—Offensive Coordinator PJ Wells
Special teams
Special Team coordinator Scott Taylor had Hondo dead to rights on the opening kickoff. If not for a questionable holding call, Devine would have started the game in Hondo territory with a ton of momentum off a gutsy call.
“We executed a nice reverse on the opening kickoff that unfortunately was negated by a hold,” Taylor said. “Aside from that, Jacob Featherly converting six of six extra points and along with Justin Contreras handled kickoff duties well by placing the ball where we needed it placed. Sergio Martinez had some solid tackles on kickoff. We ran the punt block well that led to a holding call when their guy tackled Buddy Santos that gave us great field position.”
Coach Gomez was complimentary of Coach Taylor’s units as well. “Coach Taylor dialed up a great reverse play on kickoff return which sprung Xsavior Martinez on an 80-yard run but it was called back. On a fake punt, we had a bad snap that caused bad execution. With that being said, our kids played hard on all our special teams. We were also able to put some heat on their extra point attempts.”
Crystal City
“Now we have to move on to Crystal City. Coach Lopez and his staff has had a lot of success in the past few years. They are the only team that has made it to the second round the last couple of years so they are rich in tradition. They will play their best game against us and it will be a war. We will be ready for the challenge.”
Kickoff is set for 7:30pm in the Spinach Capital of the World.
Final say from Gomez
“Our boys played with great effort and focus and that is why we won. It did not start at 7:30 on Friday night; it started Monday-Thursday during the preparation for the game. We have bigger goals then just beating Hondo. We want a Gold Ball and we do not want to share it. I told the guys after the game before I let them go home that this is the same position we were in last year. Last year we had a sloppy week of practice after a big emotion-draining win and we did not play our best against Crystal City and lost. If we want to be champions, we have to play every game as if it is a championship game. Because honestly, if we do not do that then we can slip and lose. I challenged them to have a better day than the day before from now on. We must continue to get better and keep believing in the scheme so that we are at our best at the end. In the playoffs, anything can happen if you win the first one (bi-district). We will take it day-by-day; game by game. We will just concentrate on getting better and playing with intensity. That is when things start getting fun! That’s when players are at their best!”
By Jerel Beaty
Staff Writer