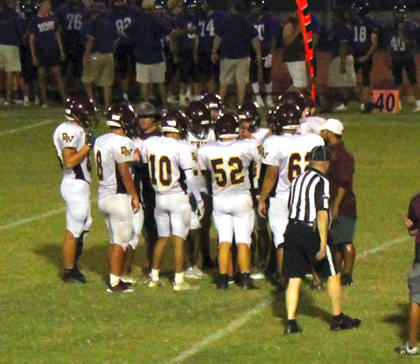 The Devine Warhorses officially begin their gold-ball chasing 2021 campaign in San Antonio against Highlands Friday night at 7:30pm. The Horses are coming off an 8-3 season that saw them finish as District 15-4A DII runner up and bi-district qualifiers.
The opening kickoff is slated for 7:00pm instead of the customary 7:30pm time slot.
The Horses open against a tough San Antonio Highlands squad that has both quarterbacks returning along with two of their statistical rushing leaders. Highlands’ 2020 season ended in their 24-34 bi-district playoff loss to San Antonio Southwest Legacy.

Highlands finished 4-2 overall including a 2-1 District 13-5A D1 Zone B record in a six-game, COVID-shortened 2020 season.
Senior quarterback Jacob Gutierrez nearly hit the 1,000-yard mark a year ago passing for 934 yards and 12 touchdowns. He threw only three interceptions.
Junior backup quarterback Joseph Clay also returns ready to fill in when or if necessary. In limited duty, Clay passed for 120 yards and two touchdowns, while completing 13 of 19 attempts. He also threw for two scores and was picked off once.
Returning running backs senior D’Marrion Gonzales and junior Jaylin Adams will be the focal point of success for Highlands running game.
Gonzales rushed 53 times for 443 yards and six touchdowns a year ago, while Adams contributed 234 yards on 35 carries.
Who is going to catch passes from Gutierrez is anyone’s guess as the top three receivers all graduated at the end of last year.
Gomez’s preview
Devine Head Coach previewed his squad’s first real-game competition commenting, “Highlands has a very talented team with nine returning starters on a very potent offense and five returning starters on defense. They have a big offensive line! They also have an elusive running back that can go. He is tall and strong along with having speed. Their QB is good sized and quick. He does a good job scrambling and getting out of the pocket. He throws the ball well and has some speedy receivers with good size.”
Highlands expects to give the Horses some fits on defense as well, but it is a scheme that Devine has been practicing against as they implement a new offensive playbook going into 2021.
“Defensively they run a 50 defense,” said Gomez about what his O-Line will see lined up against them. “Their nose guard is big and powerful and their defensive tackles are big as well. They have some big, quick linebackers and their defensive backs are good sized and have speed as well.”
Dave Campbell’s is high on Highlands as they are the magazine’s pick to win their district. Gomez and his staff know they “will have our hands full” with a team picked to be the best in their district.
Two-a-days in the review mirror
With two-a-days complete, two scrimmages in the books, and a regular practice schedule now being the norm, the Horses finally get to put all their spring, summer, and preseason prep into action.
“Each week we have gotten better at executing our offense. Maybe I put on too much for the Navarro scrimmage, and that is why we did not execute well. We are going to keep it simple and get better and more efficient at a few plays, then expand as we go. Defensively we kind of have to switch gears now from a quick-hitting Navarro offense to the spread offense of Highlands as they try to spread defenses out in order to get their skilled athletes in space. We have to really have a great night defensively on Friday in order for us to be successful.”
Expectations
Devine has never shied away from competition as they have regularly played 5A schools and much bigger 4A schools without hesitation. Expectations never change for the Warhorse coaches nor do their expectations of their players.
“I expect our kids to respond the right way and have a great week of practice. We look forward to the challenge ahead of us and our goal is to get better every week and play with great intensity. Coach Castillo is doing good things over there at Highlands and we have great respect for their program, but at the same time we have a good program here and I expect us to be ready and able come Friday,” Gomez said in conclusion.

Specialties
Special team play can easily dictate the success or failure of any football team. So much goes into the preparation of punting, kickoff, kick return, and extra point units that rarely get any type of real reps until that first Friday night ballgame.
Practices and scrimmages are controlled reps in such a way that no one player, or coach for that matter, gets a 100% look at how any one of those plays will actually go down.
For Warhorse Special Team Coordinator Scott Taylor, he looks for his players to be as excited as he is to get true game action against Highlands.
“It was fun preparing the special teams for this week as we start real games that add the third portion of the game,” Taylor stated. “As the special team’s coordinator I am looking forward to seeing a good majority of these guys back in positions they played very well in last season, and am excited for them to swing plays in our favor.”
Where and when
SAISD Sports Complex is the host site for the first ever meeting between the two schools. Located at 1000 Edwards Street in San Antonio (78204), internet directions say driving time is between 35 to 45 minutes.
Kickoff is set for 7:00pm.
By Jerel Beaty
Staff Writer