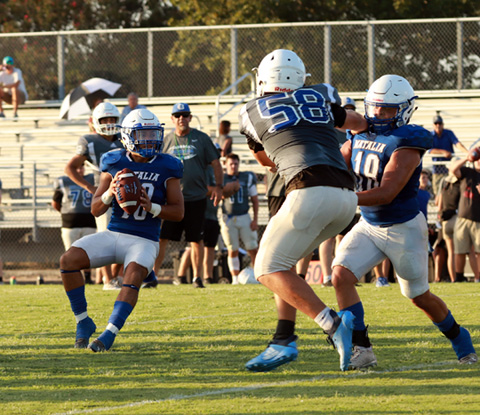 The Natalia Mustangs rounded out scrimmage action last Thursday at home vs. the Bandera Bulldogs. The stage is now set for the 2021 season opener, as the boys in blue will welcome the Class 3A (Div.I) #42 Jourdanton Indians to town Friday night as the season gets underway.

Bandera Scrimmage- The boys in blue had a very competitive and physical scrimmage with a much improved from a season ago Bandera Bulldogs last Thursday as mentioned. Bandera featured a much more physical ball-club along with a sophomore QB who showed a lot more skill and confidence.
Natalia continued to show lots of positives as well as some areas that need improvement. Natalia’s running game continued to be their strong point, although QB Ryan Rizo did show he is improving on not only his short throws, but his long ball as well. His long ball did find David Silva in the end-zone on about a 30-yard pass play during the scrimmage after scrambling away from defenders and leading the receiver perfectly.
Natalia and Bandera finished the scrimmage which included scripted action as well as two live quarters tied 1-touchdown each. Bandera’s touchdown came as their QB ran in from about 8-yards out.
“We saw a lot of good things on both sides of the ball,” Natalia Head Coach Ilyan Martinez said. “We felt like we got better from scrimmage one to scrimmage two and we ran the ball really well. I felt our offensive line played a lot better and we cleaned up some areas. I was pleased with our defensive play as well.”
According to Martinez, there are still areas that need improvement as they enter week one of the regular season.
“Consistency is our weakest area right now,” Martinez said. “We need to be able to stack plays. Right now, we put ourselves in bad situations when we don’t string positive plays together. It puts us behind in the chains and we have to play from behind the sticks and we are not built to do that right now.”
Jourdanton Preview- The Indians of Jourdanton High will ride into town for battle Friday night as the two towns will square up for the 4th season in a row in non-district. Jourdanton has dominated Natalia the last two seasons (48-24, 58-18) and they are picked to be toward the top of their 3A (14-3A Div.I) district once again. Natalia’s last victory over Jourdanton was on a last minute play in 2018-2019 when the Stangs shocked the state ranked Indians 34-28.
The Indians (446 enrollment at the HS) return six offensive and five defensive starters from a ball club that finished 11-2 overall bowing out of the Regional Semi-Finals.
“Our strength so far has been our defense during the first two scrimmages,” Jourdanton Head Coach Darrel Andrus said. “I have been really impressed with our tackling and ability to play fast to the ball. As far as an area of concern, we have been inconsistent on offense. We have looked solid at times, but then quickly make a mental mistake to end a drive and we can’t do that vs. a team like Natalia.”
Jourdanton is dealing with the loss of stand-outs such as QB Cole Andrus along with All-State receiver Jared Lilly along with a number of other good players.
According to Coach Ilyan Martinez, Sophomore QB Matt Hicks has filled in nicely thus far for Jourdanton.
“Jourdanton has re-loaded this season and they have another great class coming through with a lot of weapons,” Martinez said. “They have a QB who is playing like a veteran already and his size and ability to throw the ball will make him difficult to defend.”
Jourdanton will be led in the back-field by RB Nick Cordova along with RB Juan Lerma.
“Offensively, Jourdanton still has a spread-up tempo team,” Martinez said. “They are going to snap the ball as fast as they can to try and catch you out of position. They have almost their entire line back and a couple of bruiser RBs. We will have our hands full trying to slow down their run game, but I believe our defense will be up for the challenge.”

According to Martinez, Jourdanton is pretty good defensively as well and as mentioned, is something Coach Andrus has been impressed with thus far.
“Defensively they will be anchored by their LB crew returning including MLB #9 Robert Miranda who plays side-line to side-line,” Martinez said. “Their defensive line has incredible get off and our offensive line is going to have to jump on them early in order to establish the run and slow down their pass rush.”
Coach Andrus has the following to say when asked about Natalia: “They are a very physical and well coached team,” Andrus said. “We will have to match their physical style of play and I believe two good teams will be on the field that made two good playoff runs a season ago. I expect a good one,” Andrus concluded.
Parents Night 2021: Parent’s Night 2021 will begin at 6:30 p.m. at Mustang Stadium on Friday night. Kick-off is set for 7:30 p.m. and tickets are on sale now on TicketSpicket as no tickets will be sold at the gate.
Come out, pack the stands with blue and cheer on Natalia as Big Red comes to town for the season opener. Let’s make Mustang Stadium a true home-field advantage and support the Stangs, the Natalia Cheer Squad and the Natalia Mustang Band!
By Eric Smith
Staff Writer