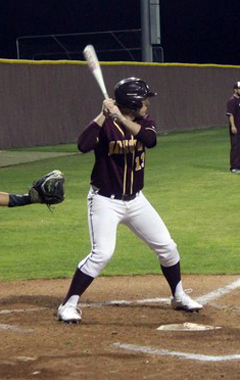 In a non-district game, the Varsity Warhorses beat C.C. Winn 8-7 on Friday. The Warhorses were down 4 runs after the first inning and in the bottom of the second with 2 outs, the Warhorses scored 6 runs to take the lead. Winn and Devine each scored one run in the fifth and Winn scored two runs in the seventh to tie the game, however in the bottom of the seventh, the Warhorses scored the one run they needed for the win.
Devine’s scoring play, bottom of the second, 2 outs, with Joey Seguin, Chad Lawson, and Isaiah Oropeza on base, Joseph Guajardo walked to bring home Seguin. Dalton Kramer at bat and Lawson scored on a passed ball, Kramer hit a double to left and Oropeza and Guajardo scored to tie the game at 4-4. Newt Crouch hit a single and then Truett Barron double and Kramer and Crouch scored. Brady Harrell hit a pop fly into a glove for a final out. Bottom of the fifth, Gehrig Runyan was hit by a pitch, and then with Brady Miller at bat, Runyan made it to second on the throw. Miller hit a single and Runyan made it home, Devine 7 to Winn 5. Bottom of the seventh, Harrell and Lawson on base, Miller hit a double to center and Harrell scored the winning run.
Oropeza1 run, 1 hit. Guajardo 1 run, 1 RBI. Kramer 1 run, 1 hit, 2 RBIs. Crouch 1 run, 1 hit. Barron 1 hit, 1 RBI. Harrell 1 run, Runyan 1 run. Lawson 1 run. Miller 3 hits, 2 RBIs. Seguin 1 run. Pitchers Oropeza 10 strikes in 12 pitches, Crouch 8 strikes in 14 pitches, and Harrell 51 strikes in 85 pitches.
The Warhorses will play in Carrizo Springs Friday night, at home against Crystal City April 12th, in Pearsall April 16th, at SA Wagner April 19th, and then in Hondo April 23rd. The Warhorses are 30- in district and 13-5 overall.
By Dicy Chambers
Sports Writer