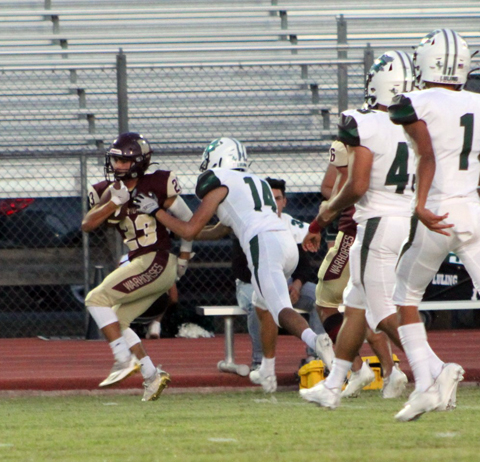 With Devine’s 19-0 victory over Luling, the first half of the season is now officially complete. The Horses opened the season with victories over 5A San Antonio schools Highlands and Memorial, before defeating 4A YMLA.
Devine stumbled a bit against 4A Pleasanton before finding the win column once again this past Friday night in front of a homecoming crowd. The Horses are now 4-1 on the season.
Up next X 5
The most important game of the season will happen every Friday night from here on out. Devine opens district play on the road against Carrizo Springs October 8. Getting a victory over the resurgent Wildcats is vital to the Warhorses championship aspirations.
The Horses travel to Hondo October 15 before finally playing a home district game on October 22 against Bandera. Devine goes to Pearsall to take on the Mavericks on October 29 before playing their last district game November 5 at home against the Crystal City Javelinas.
Tough yards
Devine earned every one of their rushing yards as Luling had some big dudes up on their defensive line. The Warhorse front seven had their hands full all night as the Eagles had the advantage in both height and weight.
Although I have not seen other teams in the district at this point, the Warhorses should be going against more similar players for the remainder of the regular season.
Running low
The Warhorses did not have their full complement of running backs last week. As mentioned above the Eagles had the size advantage against several Warhorse players, including against Devine backs assigned to block on any particular play.
In Devine’s running scheme, backs are asked to block if they are not toting the ball. According to Warhorse running back coach Evan Eads, he was proud of the effort put forth by several of his position players.
“We were down a couple of backs due to injuries, but the ones who played picked up the slack. Yes, we made some mental errors in the game and need to eliminate those in the future, but I was happy to see that we were the aggressors. We attacked our blocks better than last week and it is all about getting better. The score will take care of itself.”
Masonry work
Mason Martinez’s spectacular grab was noted in the Warhorse recap story, but Mason performed well on the defensive side of the ball as well.
Linebacker coach Evan Eads stated, “Mason was around the ball all night. He had two sacks and assisted on three others, while also forcing a fumble and having a couple of tackles for loss of Eagle yardage.”
One may think the catch energized Mason to perform well defensively too, but he was already a defensive factor in the first quarter just ahead of his incredible catch.
Team stats
Total yards Dev 276, Lul 142 First downs Dev 16, Lul 9 Rushing Dev 48-245-5.1 Lul 37-113-3.05 Passing Dev 1-5-31-0TD-1INT, Lul 4-9-29-0TD-0INT Punting Dev 3-92-30.67, Lul 6-173-28.83 Fumbles-lost Dev 1-0, Lul 3-2 Penalties Dev 2-20, Lul 12-125.
Warhorse stats
Passing Brady Hackebeil 1-5-31-1INT Receiving Mason Martinez 1-31 Rushing Gabriel Esquibel 16-63-3.9-2TD, Hackebeil 14-61-4.4, Xavier Contreras 5-53-10.6-1TD, Gus Puente 6-30-5.0, Marcus Rodriguez 4-28-7.0, Aiden Zapata 2-5-2.5, Hayden DuBose 1-5.
Scoring summary
DEV—Gabriel Esquibel 4-yard run (Caden Hanson PAT), 7-0, 7:02, 1st.
DEV – Esquibel 7-yard run (conversion failed), 13-0, 11:32, 2nd.
DEV – Xavier Contreras 9-yard run (conversion failed), 19-0, 5:44, 3rd
By Jerel Beaty
Staff Writer