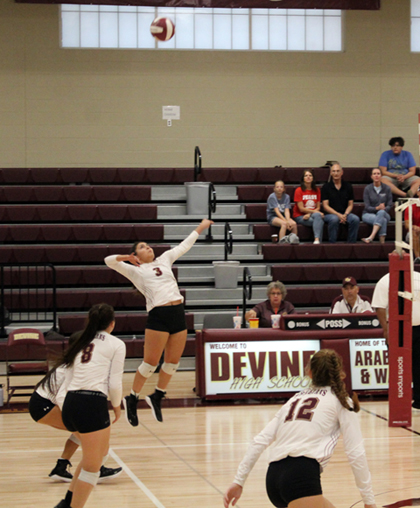 Devine opened district Friday night against the Somerset Bulldogs. But first they had to face SA Feast. The Arabians ended pre-district 17-13 and added a win after beating Somerset.
Feast was ready for the Arabians on September 21st. Devine lost in three sets but they learned what they need to work on for district.
“Even though we didn’t walk away with the win I thought we did some great things during this game. Our front row really battled against some taller players on the other side of the net. I think FEAST was a great game to end our preseason on and really prepared us for district. We have learned lots of lessons during the preseason games that we can apply to district games and help us prepare for another run in the playoffs,” said Coach Leigh Anne McIver.
Devine lost 21-25, 21-25, and 26-28.
Avery Cruz 14 kills, 2 aces, 14 digs, 1 assist. Rylee Esquibel 14 kills, 2 aces, 12 digs. Kristina Moralez 7 digs. Bailey Oropeza 7 digs. Darian Alvarez 3 kills, 2 blocks. Brooklyn Miller 9 kills, 1 dig. Macey Hein 1 kill, 1 ace, 6 digs, 32 assists. Aleyna Gerlach 7 kills, Skylar Blanton 1 kill, 2 blocks. Cece Martinez 2 digs.
Somerset fell hard to the Arabians on Friday night. There was not much competition on the other side of the net so Devine easily won 25-11, 25-12, and 25-11.
“We started district off with a bang!!! We really dominated on both sides of the ball. Our hitters only had 11 hitting errors all night and we earned majority of our points. Our defense allowed us to be able to run a smooth offense because of their passes. All around it was a great night! One step closer to reaching one of our goals,” reported Coach McIver.
Devine earned 8 aces and 40 kills against the Bulldogs with 21 kills coming from Esquibel.
Zoe Gonzales 1 kill, 1 dig. Cruz 3 aces, 22 digs, 2 assists. Esquibel 21 kills, 1 ace, 10 digs, 1 assist. Moralez 8 digs, 1 assist. Oropeza 3 aces, 6 digs. Alverez 5 kills, 1 dig. Miller 1 kill, 2 digs. Hein 5 kills, 1 block, 10 digs, 32 assists. Brianna Torres 1 dig. Gerlach 4 kills. Blanton 3 kills, 1 block, 1 dig. Martinez 1 ace, 4 digs.
The will host Brooks Academy Friday night and then head to Fox Tech on October 8th and Somerset October 12th.
By Dicy Chambers
Sports Writer