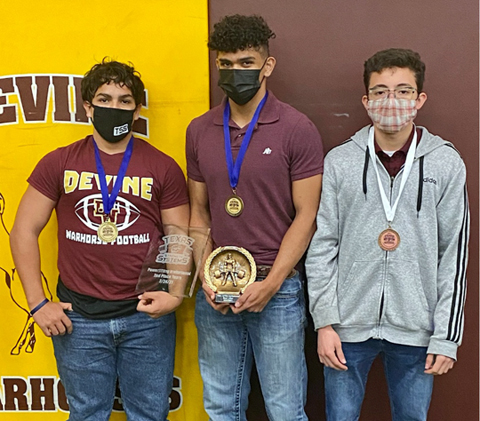 Devine Warhorse powerlifter Eric Hernandez along with Head Coach Paul Gomez and assistant Devin Rotramel make the trip to Bishop for Hernandez to compete in the Region V Powerlifting Championship round on Thursday, March 11.
Gomez stated, “Eric has worked very hard for this honor. As a team, the boys were only able to compete in two meets this year because two meets were cancelled due to the snow storm we had a few weeks ago.”
According to Gomez, Eric didn’t let a little snow get him down or hinder his ability to increase his lifting total.
“Between the first and the second meets, Eric improved his total by 90lbs. He went from a total of 1,140lbs to 1,230lbs. Any other year his total would qualify him for state if he could get at least 1,200 pounds to meet the state qualifying total at the regional meet. However because of COVID only the top two lifters in each class will go to state regardless of totals.”
Eric gets to advance and there is no doubt that is a great achievement during this crazy COVID campaign. Unfortunately for other Warhorses, this year presented a roadblock to the championship round that simply could not be overcome.
“Right now there are five lifters in Region 5 that have over 1,200lbs total. It’s a tough break as some of these kids will have a total higher than some of the other regions top two kids but still will not be able to compete at state. Either way we are very proud of Eric and we look for great things to happen in the future as he is only a sophomore,” Gomez said about the lower number of Warhorse lifters than what would have been in a “normal” powerlifting season.
By Jerel Beaty
Staff Writer