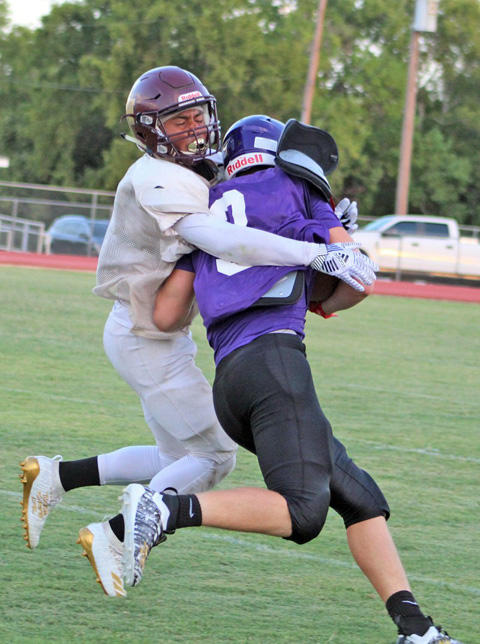 For those that braved the heat last Thursday evening at Warhorse Stadium to see Devine take on the Navarro Panthers in each team’s final tune up prior to their regular season Friday night kickoff, they witnessed the Warhorse defensive stuffing the Panthers at nearly every turn during the initial part of the scrimmage. During the live quarter, however, things seemed to change.
Defensive Coordinator George Villa kind of shook his head when explaining the way the scrimmage played out for his defensive unit.
“It was two stories within the same tale. During the first 40 plays of the scrimmage, I thought we really did some great things. Our defense was reading, reacting, and arriving aggressively to the ball. It was very fun to watch.
Navarro’s Slot-T offense can be very confusing to opposing defenses that do not read and trust their keys. Our kids were coachable all week and it showed in the first 40 plays of the scrimmage. We did have to play where they scored but again, it was us, not them. We were in the right position to make the plays, but we did not make some tackles.
During the open quarter, we were not the same team at all. It seemed like we were gassed and out of it. Our challenge going into the Kennedy game is to have maximum effort for 4 quarters!”
By Jerel Beaty
Staff Writer