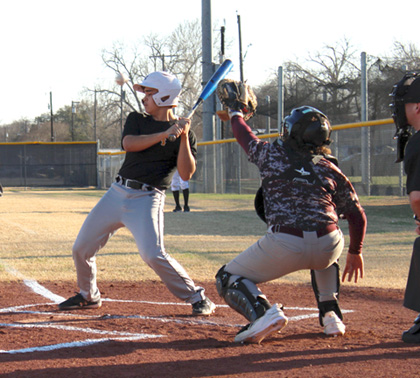 The Devine Warhorse baseball team got its feet wet this past Saturday as they scrimmaged the Panthers over at Medina Valley High School, then took on Lytle at home Monday evening. The scrimmages were the first two of five currently on the Warhorse schedule as they prepare for the 2022 season opener in Pearsall on Monday, February 21.
Medina Valley
“For our first scrimmage we were very pleased with the overall performance,” Head Coach George Villa stated. “There are still some areas that we need to improve on as fast as possible and other areas where we know from experience that it will take a little longer.”
The two-hour scrimmage gave Villa and assistant coaches Heath Poppe and Bart Oropeza a chance to evaluate several players at different positions, and it gave an opportunity for the players to show what they are capable of doing between the lines as well.
“What we really like about this group so far is their eagerness to compete on every pitch. That’s been our mindset in practices and, so far, we can’t complain as a staff,” Villa continued.
Although no official score is recorded in scrimmages, Devine hung tough allowing only four runs to cross the plate while getting two of their own.
Scrimmages are beneficial to a team’s pitching staff as the coaches can rotate in a player to take the mound for as long, or as short of time period needed to get a true evaluation.
“We threw each pitcher 15 pitches per side and tried to get as many possible outs as possible in those 15 pitches,” Villa said about the way he utilized his pitching rotation. “We had five innings where we recorded three outs within the 15 pitches allotted. We had one inning where we recorded five outs on 15 pitches and one inning where we recorded four outs on the same pitch-count.”
Lytle
Devine took on Lytle at Warhorse Baseball Field Monday evening in their second scrimmage in a three-day span. As somewhat expected in early season scrimmages, Devine hit a few snags along the way but continued to put forth their best effort throughout.
“Against Lytle, things did not go as well as I thought it would based on what I saw against Medina Valley Saturday. We have a lot of things to clean up. But, I am glad that our kids are competing the way they are. The sky’s the limit for this team as long as they continue to have the drive to get better every day!”
Up next
Devine has three scrimmages remaining. Davenport is up next for the Warhorses Friday, February 11 followed by Floresville (Tue-Feb15) and San Antonio Kennedy (Fri-Feb18).
The Warhorses open their regular season in Pearsall Monday, February 21 before playing in the Somerset Tournament February 24-26.
By Jerel Beaty
Staff Writer