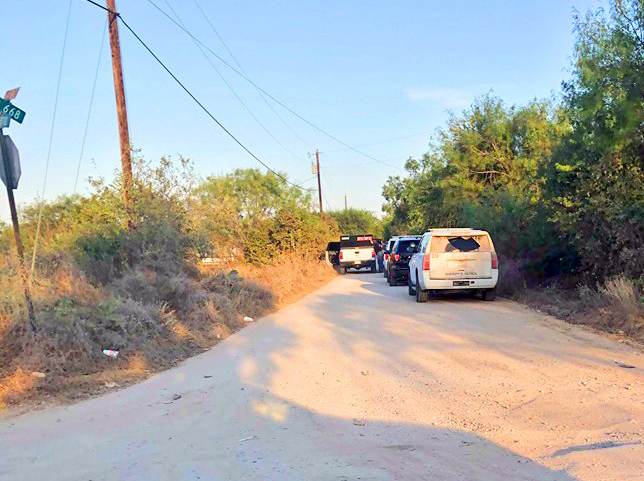 Twenty-year-old young man, Noah Hoover, was killed in a drive-by shooting outside Devine this past Sunday evening, October 6. A second man was also hit. A person of interest, Nathan Gruensteiner of Lytle, was taken into custody, along with his girlfriend, who were both inside what is believed to be the getaway vehicle, and led Williamson County troopers in a pursuit Monday morning.
“The vehicle stopped in front of the home and fired and then kept on shooting as they drove off, between 10-15 rounds. Thank God no one else was shot due to the reckless actions of the shooter or shooters. I believe two different calibers of ammunition were used,” said Medina County Sheriff Randy Brown.
It happened several miles outside of Devine in the 100 block of CR 668, which intersects with CR 5710. County Road 668 is off to the right, near where CR 5710 turns into a dirt road. The shooting happened near, but not inside a nearby mobile home park.
“All parties knew each other. We believe the shooter or shooters had been to the residence earlier that day and has some type of argument, and then returned with a gun,” Sheriff Brown adds.
“We are going through a lot of information coming from many different directions right now, and in the process of interviewing several people,” Sheriff Brown said.
The young man who sadly passed away was Airlifted to University Hospital suffering from two gunshot wounds. Shortly after arriving at University Hospital, he was pronounced deceased.
The second victim, Jesse Lee Hoover, 34 years old, was transported to University Hospital by family members after suffering from a single gunshot wound to the abdomen area. He was rushed into surgery, and expected to make a full recovery according to a press release.
Information gathered at the scene from witnesses led authorities to search for a dark colored sedan, from which multiple shots were reported to have been fired from.

“We were able to gather a good description of the vehicle and license plate, and Williamson County Sheriff’s Office along with DPS assisted us with locating and taking two people into custody. Suspect Nathan Gruensteiner (a resident of Lytle Ranch Acres) and his 16-year-old girlfriend were taken into custody in the Austin area around 2:40 am Monday morning. The trooper’s attempt to stop the driver turned into a pursuit, and a wreck and both were taken into custody. A trooper’s vehicle was damaged in the wreck, but he is okay.”
More
Williamson County Sheriff’s Office stated that “The suspect vehicle crashed into an open field in Bartlett after deputies attempted a traffic stop on SH 95 at SH 29.”
In a press release Monday, it stated “We were able to gather enough information that led us to believe 20-year-old Nathan Gruensteiner as a possible shooter. We were able to locate his black Acura traveling North between Bastrop and Austin. Williamson County Deputies and Texas Highway Patrol attempted to stop the suspect vehicle. The vehicle attempted to flee, eventually wrecking, causing damage to a Troopers’ vehicle.”
“This is just a sad time. The young man who lost his life was only 20 years old,” Sheriff Brown said.
The last drive-by resulting in a murder that we can recall in this area also occurred in the CR 5710 area, in front of a home just before the intersection of CR 664.
Nathan Gruensteiner was booked into the Williamson County jail. This Monday, Gruensteiner was charged with Evading with a Motor Vehicle, while the investigation continues, and additional charges of Murder were filed Tuesday morning.