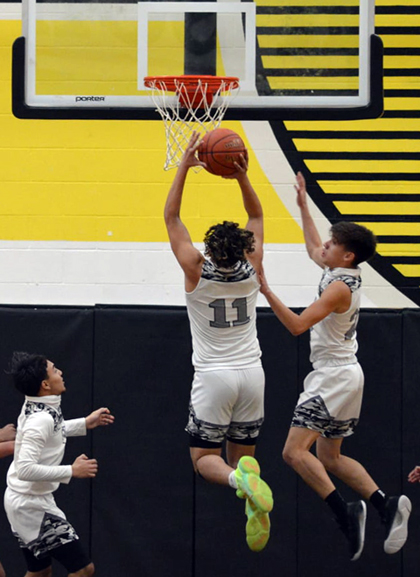 The Lytle Pirates are holding on to 2nd place behind Jourdanton in district. Sitting at 9-2, the Pirates are looking at a great playoff run after they finish two more games. They played Poth last night and will take on Natalia at home this Friday. Come out and Support your Pirates!
Facing Dilley on Friday, the Pirates took the win at 68-62 in an intense game. “The Wolves got hot from the 3-point line and hit 12 threes to stay within striking distance all night, but our full court pressure closed out the game. The second half was a total team effort to win on the defensive side,” said Coach Jacob Hernandez.
Lytle took down Poteet on Friday night in an easily won game. Winning 96-55, “the Pirates were led by sophomore sensation Jalen Guevara who had 27 points, 8 rebounds, and 6 steals. The kid was on fire from the outside and couldn’t be stopped driving into the paint for lay ups over the Poteet defenders. Junior Bryson Duty had a great game off the bench scoring 17 points and having 3 steals. Bryson has averaged over 10 points the last four games becoming a key asset of the bench. Jordan Balderaz added 13 points and Jacob Ulrich added 11 points to keep the offense going through the night,” reported Coach Hernandez.
By Dicy Chambers
Sports Writer