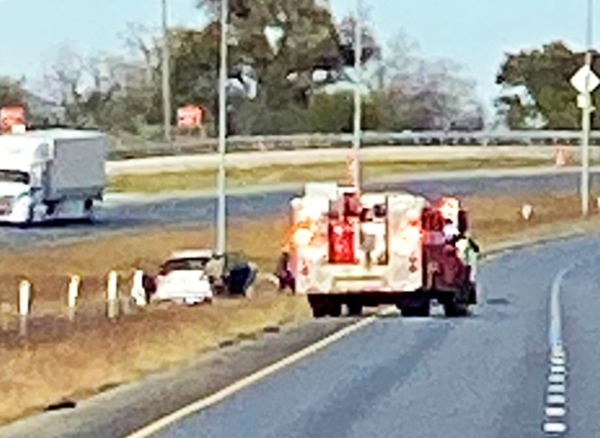 What looked like just a “small” piece of pipe laying on the interstate proved to be plenty dangerous as four cars slammed into it this past Friday afternoon, March 6. Two people were also transported by ambulance after the four-vehicle accident on I-35 Northbound near exit 121. First responders got the call around 4 pm for the accident which reportedly totaled at least one of the vehicles and tore up the undercarriage from two others, rendering many of them non-drivable.
“The red oilfield pipe was only about 3 feet long with a couple of fittings on it, but it was really heavy,” said Assistant Fire Chief Mike Walker. “We had to block off the interstate for about an hour and traffic was backed up all the way past Moore.”
According to reports, the first vehicle struck the pipe fitting and spun into the median striking the cable barrier, and then a second and third vehicle hit the pipe causing undercarriage damage, and then a fourth vehicle struck it, blowing a rear tire.
If you ever see an object on the roadway, please report it to authorities as you never know just how dangerous it can be when vehicles either strike it, or swerve to miss it.