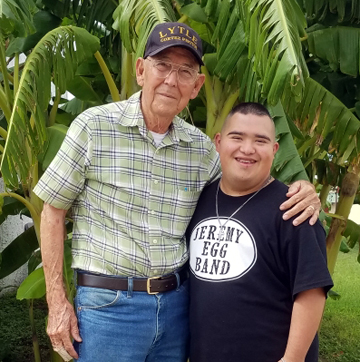 Well-known Lytle resident Pablo Cortez has been asked to serve as this year’s Grand Marshall of the Lytle Homecoming Parade set for Saturday, November 6 in downtown Lytle. He is a true example of someone who loves his family, friends, community, and God.
Cortez’s grandson Richie Hughes will be on another float, the Down Syndrome Awareness float teaming up with another DS student, 3 year-old Juliet Munoz.
21-year-old Richie Hughes and 3-year-old Juliet Munoz are proud to be Lytle Pirates and are excited to be participating in this year’s homecoming parade.
“Both were born with an extra 21st chromosome and since October is Down Syndrome awareness month, their parents thought it would be a great way to share with the community what a joy it is to have a person with Down Syndrome in your life”, said his mother Belinda Hughes.
“A parade is a great time to celebrate the fact that children born with Down Syndrome can absolutely live happy and long lives with the support of family, school, and community.”
“Hopefully, seeing the smiles on Richie’s and Juliet’s faces as they pass by in the parade will inspire you to advocate for their acceptance and inclusion. Most importantly help them spread their joy and love to others,” Huges said.
Outdoor Concert featuring Billy Mata
Billy Mata and The Texas Tradition will perform at Baby Huey’s, Lytle, Texas on November 6th at 8:30 PM on the new outdoor dance floor. Doors open at 5PM and close at 1AM, beer will be half price from 5-7. There is a $10 cover charge at the door or online to attend concert, minors must be accompanied by an adult. This concert is outdoors, a new outdoor dance floor is currently being built. Food will also be available for sale from Mojo Man Eateries food truck. You are welcome to bring your own lawn chairs, come out to support Lytle and the Lytle Ex- Student Association.
Pablo Cortez’s Bio
Pablo S. Cortez is a Lytle Alumni from the class of 1957 and a lifelong citizen of Lytle, Texas. He continues to be an active member of the community. He takes most pride in leading the charge in restoring the historic Catholic Church in Coal Mine and having the community use it for worship for 34 years. He retired from Kelly AFB after 33 years of civil service.

As a Lytle Pirate student in the 50’s, he also had the responsibility to help the family as a migrant worker, so he only attended school one half of the school year all his life, until his senior year. His senior year was the only time he attended school for an entire school year. He remembers coming back every year, mid semester, only to be sent to take a test that he was never prepared for. He feels so grateful to his friends who helped him succeed and graduate despite all the obstacles he faced.
Pablo is most remembered as our local hometown photographer. What started as a hobby turned into a lifelong business and generations of Lytle students have been on the other end of his camera lens.
While in the Army and stationed in Alaska, Pablo became interested in cameras and the darkroom which still has him taking Pirate pictures 60 years later. If you attend LHS, beginning around the mid 70’s, you probably remember Mr. Cortez with his camera on the courts or the football field. He probably took your photo on parent’s night, at drama contests, halftime band performances, awards ceremonies or graduation. You probably posed for him if you were a cheerleader, twirler, flag girl or in a Lytle Junior Miss pageant. He is still doing what he loves best at our home games for this generation of Lytle students too! He is a familiar sight at Lytle Pirate functions and you will usually hear someone shout out to him, “Mr. Cortez, will you take a picture of my son (or daughter)?”
Pablo says he admires young people and knows how quickly their high school years will fly by and he wants to capture their beautiful memories forever in his photographs. Someday they will treasure them as they show the photographs to their children and grandchildren.
Thank You Pablo for being there for all our students for so many generations.