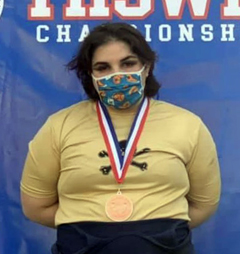 Competing at the state level is hard for any athlete but Emily Oliver has worked hard all season and made it to the state finals. Held in Waco March 19-21st, Oliver’s hard work paid off as she earned 2nd in the squat. “Oliver had a bit of a tough day at State, she caught a cramp in the bench press and was unable to complete the deadlift, however, just to get there she is one of the top 12 lifters in the State of Texas and will always have that,”: said her coach Ric Richmond.
This week Rylan Wagner will head to Abilene to compete in the boys states meet. “Wagner looks good in his preparations for his opportunity to lift in the state meet. He competes this upcoming Saturday against the best of the 181 weight class in the State of Texas,” replied Coach Richmond.
By Dicy Chambers
Sports Writer