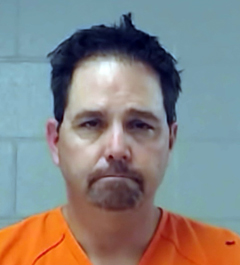 On July 14, 2021, the Medina County Criminal District Attorney’s Office secured a conviction and a sentence of life imprisonment, without the possibility of parole, on Brian Nixon for the offense of Capital Murder. Upon conclusion of the 7 day trial, the jury took less than 2 hours to return a verdict of “guilty” for the January 21, 2016 murders of Debra Echtle and Tylene Franklin Davis. The murders occurred in the Medina River West subdivision, near Castroville.

The testimony and evidence produced at trial showed that Nixon attempted to destroy the crime scene by pouring gasoline throughout the house, and on one of the deceased victims, and on a sleeping third attempted victim, before partially igniting it. Nixon further fled the scene, and led then Deputy Cathy Gonzalez and other police officers on a high speed chase, which required the use of spike strips by the Hondo Police Department and a Pursuit Intervention Tactical Technique (“P.I.T.T”) maneuver by MCSO Sergeant Todd Heilig to bring him to a stop in the median of U.S Highway 90, just East of State Highway 173.
During the approximately 5 hour standoff which ensued, Sheriff Randy Brown observed one of the deceased victims in the back of Nixon’s pickup truck. After extended negotiations with MCSO Lieutenant Donny Whitaker, Texas Ranger Joel Kite, and Sheriff Brown, Nixon ultimately surrendered himself into Brown’s custody.
District Attorney Mark Haby credits the thorough investigation and professionalism of the Medina County Sheriff’s Office, and all assisting agencies for the result achieved at trial. Haby also credits the prosecutors Julie Solis, Scott Simpson and Edward Shaughnessy, along with Chief Investigator Debra Lankford and staff who worked in his office for countless hours spent preparing for the trial which resulted in the “guilty” verdict and sentence.