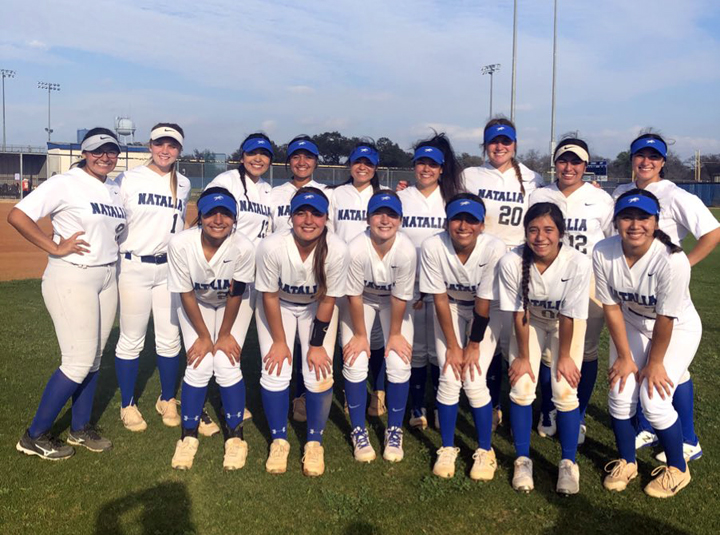 The Natalia Lady Mustangs avenged from a season opening loss a season ago to Orange Grove with a 4-1 victory Monday night in Natalia. The Lady Mustangs used stellar pitching by sophomore Abi Woodson, timely connections offensively and a number of big defensive plays to overcome 2 defensive errors in the game to claim the win.
The Sophomore pitcher for Natalia, pitched 7.0 complete innings as she allowed two hits and one run over the seven innings, striking out nine and walking 0.
“Abi Woodson pitched our team to victory,” Coach Tara Cortinas said.
Natalia broke open the scoreless game in the bottom of the 3rd inning as they rallied with two outs. Sophomore Taty Alvarado started things off with a single on a hard shot past the short-stop. Mena Figueroa then reached on an error by CF which scored Alvarado. After Bivi Figueroa was walked, Natalia used small ball to produce the second run of the inning. Trista Vera laid down a bunt as OG was unable to make the play allowing M. Figueroa to score giving the home squad a 2-0 lead.
In the top of the 4th, OG got their lone run of the contest as they used one single, one error and a SAC fly to get on the board.
The final two runs of the game came in the bottom of the 6th. Bivi Figueroa started the inning off with a huge double. Natalia then used a SAC bunt by Vera to move the runner over, before watching Woodson also bunt allowing Figueroa to sore for Natalia. One additional bunt by Gabby Contreras advanced Woodson to 3rd and she eventually scored thanks to a Marina Billalobos single up the middle scoring the 4th and final run for Natalia.
“Our girls did a great job of adjusting, playing small ball, aggressive base running and trusting each other to get the job done,” Coach Cortinas said. “We pitched well and made some big plays defensively. We are extremely proud of our girls for doing the little things right.”
Stats: At Bat: Taty Alvarado 1-3-1run scored, Mena Figueroa 0-3-1run scored, Bivi Figueroa 1-1-1run scored, Trista Vera 0-3, Abi Woodson 0-3-1run scored, Gabby Contreras 0-3, Marina Billalobos 1-3-1RBI, Val Carrion 0-3, Gen Perez 0-1, Bailey Boucher 0-1.
Defensive Stats
Put-Outs: Bivi Figueroa 9, Gabby Contreras 5, Taty Alvarado 3. Assists: Mena Figueroa 4, Abi Woodson 1, B. Figueroa 1, Alvarado 1.
Upcoming Games
Natalia will make the 20 minute trip to Somerset this weekend for the first time to battle in the Lady Bulldog Tournament.
Thursday, Natalia begins action at 9:00 a.m. as they battle the Pearsall Lady Mavs at 9:00 a.m. At 12:30 p.m., Natalia rounds out play for the day vs. the LaVernia Lady Bears.
Friday, the girls in blue return where they face host Somerset at 10:45 a.m. before battling district foe Lytle at 5:45 p.m.
Saturday, tourney play concludes for Natalia as they battle 6A Highlands at 12:30 p.m. and the 4A Pleasanton Lady Eagles at 5:45 p.m.
By Eric Smith
Staff Writer