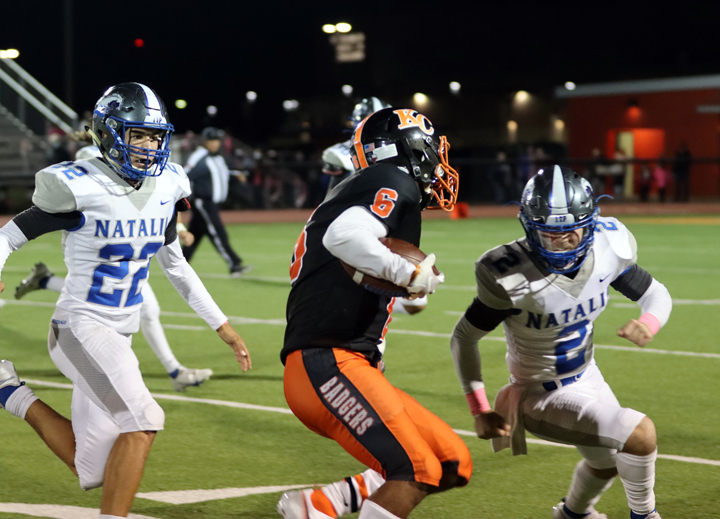 The battle for the 15-3A title will wrap up this coming Friday night at Mustang Stadium, as your Natalia Mustangs (6-2, 4-1) will host the undefeated #4 state ranked Poth Pirates (7-0) in the season finale. With the district title on the line, Coach Ilyan Martinez is asking fans to come early, be loud and make Mustang Stadium a true home-field advantage from start to finish.
The Natalia-Poth match-up was originally scheduled for two weeks ago, but was postponed to this open week originally put in the district schedule due to Covid precautions in Natalia. Let’s take a look at the #4 state ranked Poth Pirates.
Poth Outlook
The Pirates led by Coach Jeff Luna, come to town with a 7-0 undefeated record where the blue and gold have out-scored opponents 405-26.
“State ranked Poth is as good as advertised,” Natalia Head Coach Ilyan Martinez said. “They are really playing well in all areas of the game and they do not make many mistakes. They really capitalize on their opportunities.”
The Pirates have defeated the following opponents by the following scores: Lytle 60-7, Falls City 58-0, Karnes City 68-7, Dilley 62-0, Stockdale 54-0, George West 49-10 and Nixon-Smiley 54-2.
Poth Head Coach Jeff Luna was asked what positives have led to his team’s success thus far this season and he stated the following: “We have done a good job in the turnover department,” Luna said. “Through seven games, we are +15, so we need to continue to create turnovers and offensively take care of the football.”
Natalia Head Coach Ilyan Martinez was asked his thoughts on the Poth offense and he stated the following: “They run a spread offense with a good power run game with RPOs. Their strength is their offensive line with a lot of weapons in their skill positions.”
Poth is led by #4 RB Cooper Conn, #12 WR Jaeden Fangman and #79 OL Dalton Perry.
“Defensively and offensively, we have done a good job on our third down efficiency,” Poth HC Luna said. “Offensively, we have extended drives by converting on third down and defensively, we have done a good job of getting off the field.”
Defensively, the Poth Pirates will run a 3-4 cover 2/4 according to Coach Martinez. According to Martinez, defensive leaders include #79 DL-Dalton Perry, #42 LB Trevor Fuller and #4 DB Cooper Conn.

Natalia Outlook
It is no secret, the Poth Pirates will be the biggest challenge Natalia has faced this season. When comparing the two schedules, one could argue Natalia has the edge on facing more talent overall up until this point, but as you can see the Pirates do not struggle when it comes to putting points on the board and being stingy on defense.
A season ago, Natalia came out and missed three straight chances offensively including two turnovers in the red-zone due to stalling out offensively.
Of course everyone will remember, this game got out of hand when QB Woodson was hit late before being airlifted out of town to a San Antonio Hospital.
Fast-forward to the 2020 school year, this is a classic heavy weight battle between arguably the best two teams in the district, despite an ugly controversial loss to Stockdale for Natalia.
“We will have to be great tacklers and take care of the football to have a chance vs. Poth,” Coach Ilyan Martinez said.
Poth Head Coach Jeff Luna was asked his thoughts on facing Natalia and he had plenty to say about the big game.
“Coach Martinez and his staff do a great job of getting the Mustangs ready to play,” Luna said. “We know that going to Natalia and playing the Mustangs will be a big challenge. Our offense will be facing the best front 7 we have seen all year as they are big and physical. Jacob Navarro and Manuel Garcia are really good LB’s and Xavier Vasquez covers a lot of ground in the secondary. We will have our hands full as they fly to the football.”
Luna also had plenty of say about the Natalia offense coming into the district finale Friday night.
“Our defense will face one of the most balanced offenses we have seen all year,” Luna said. “I have a lot of respect for the job Coach Reynolds does. Wyatt does a good job keeping plays alive with his feet and does a good job of executing the offense. Adrian Vasquez is as tough of a runner as we have faced all season and Natalia has some big, physical linemen up front that do a great job of creating running lanes. Those guys have a lot of experience and have played a lot of football.”
Big Game is set
Early momentum will be important as the Pirates and Mustangs Clash in what is expected to be a rowdy Natalia Mustang Stadium on Friday night. Both teams have big play capabilities and both teams have numerous offensive weapons.
Natalia has been out-sized almost weekly up front, but this offensive and defensive line in Natalia has been one of the best in recent history when it comes to winning the battle down the stretch.
Natalia’s defense will have their hands full facing a very well balanced Poth offense that has a couple of very talented receivers as well as speed that if they get around the outside, can be deadly.
Although state polls have Poth as 27 and 34 point favorites, this will not intimidate the Mustangs nor their staff for they know what could have been a season ago had a few plays gone different early. At the same time, there is a ton of respect for the Poth program as Natalia is aware to win the title, they must take down one of the best teams in the state in this four quarter heavy weight battle by executing in every phase of the game and most importantly, winning the battle up front.
With Stockdale’s win over George West last week, this has thrown a wrench into the playoff scenario.
Natalia is currently sitting in 3rd place in 15-3A behind Poth and Stockdale.
A Stockdale loss to KC and a Natalia win- Natalia wins district
A Stockdale win and a Natalia win by 10 or more- Natalia wins 1st
A Stockdale win and a Natalia win by 9 or less- Natalia gets 2nd
A Stockdale win and a Natalia loss- 3rd place for Natalia.
Kickoff is set: It is #4 Poth vs Natalia Friday night in Natalia. Come early, be loud and cheer on the boys in blue as they aim for one of their biggest up-set victories in program history!
#TTP #GoStangsGo
By Eric Smith
Staff Writer