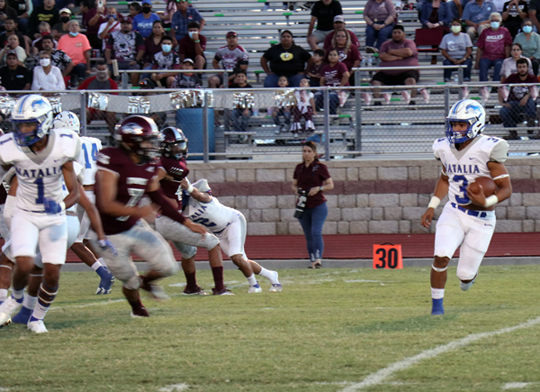 The Natalia Mustangs (4-1, 1-0) will welcome the Stockdale Brahmas (2-3, 1-0) to town Friday night for a big 15-3A (Div.II) showdown at Mustang Stadium. For Natalia, folks have not forgotten one season ago when the game ended in quite a bit of controversy with time being added back onto the clock, resulting in a home victory for the Brahmas on a last-second touchdown to defeat Natalia 21-20.
“We had missed opportunities a season ago and we will remind ourselves of that all week as we prepare for the Brahmas to come to town,” Natalia AD Ilyan Martinez said when asked about last season’s controversy.
Stockdale Outlook
The Stockdale Brahmas returned six offensive and seven defensive starters back from their squad a season ago that finished 4-5 overall and 4-2 in district play. This season, Stockdale has the following results thus far: 35-23 loss to Schulenburg, 28-26 loss to Flatonia, 34-12 loss to Falls City, 30-21 win vs. Yorktown and a 31-12 district opening win vs. Nixon-Smiley last Friday at home.
“Stockdale will be one of the best teams we will be one of the best teams we play all season,” Martinez said. “They are big and physical with a lot of skilled guys who can make plays. I expect it to be a 48 minute heavyweight fight between two teams and whichever team makes the fewest mistakes wins,”
Offensively, the Brahmas are very similar to Natalia in what they do.
“They run a lot of two back gun with power and zone,” Martinez said. “They have some tough running backs who run behind their pads. It appears they are working on a two QB system when senior #7 Clancy is in, look for him to command the offense from the pocket with his legs. He is a tough kid and when he isn’t at QB, he is at RB. That just shows you just how tough and important he is to their offense.”
Clancy accounted for over 1,000 yards on the ground a season ago with 16 rushing TDs and also 455 yards passing for 3TDs with 56 tackles on defense.
“Sophomore Derricoatte is going to be their starter for the future at the QB position,” Martinez said. “While young, he is super athletic and can make plays with his arms and legs. Their offensive line is huge and physical and they do a good job of getting on you and establishing the line of scrimmage.”
Then the Brahmas throw the football, their go to is #2 Jeremy Irwin. “He is a play maker who ios long and athletic and is someone that creates match-up issues for us. When they need a play, they throw it up to him and let him work.”
Defensively, according to Coach Martinez, it all starts with their line for the Purple Pride of Wilson County.
“#60 Senior Ryan Reynolds plays defensive end and creates a lot of issues for offenses,” Martinez said. “He is big and physical and his ball get off is the best we have seen all year. We are going to have to put a lot of people on him to give our offense a chance to produce. #54 Trentyn Voelkel has a high motor and does a great job of being around the football every play also. He is a tough kid and runs really well for his size. We will need to know where he is all game.”
Natalia Outlook
The Natalia Mustangs are riding a 3-game winning streak into this showdown as they are coming off back-to-back truly impressive defensive outings. Natalia was able to hold Lytle and Dilley under 60 yards of total offense in each of their two victories, as the offense showed up early and often in each of those contest.
As mentioned, Stockdale will be better than both Dilley or Lytle and will provide a unique challenge for Natalia.
“We will have to be the most physical football team on the field Friday night,” Martinez said. “We are going to have to limit our mistakes and take advantage of theirs. We are going to have to be productive on offense and make the most of our opportunities and will need our defense to create turnovers like they have all year long.”
Natalia has accounted for 11 recovered fumbles on defense and 6 interceptions for a total of 17 for the season in just five games which has been a huge positive for the boys in blue.
One thing that is so special about this Natalia team is the fact they have so many weapons on both offense and defense. Each and every game different young men are stepping up and making plays which has been huge. Natalia has been able to attack with both their run and pass game offensively and the success begins with the boys up front which have won 4 out of 5 battles thus far this season.
Natalia will need to get off to a fast start just as they have the last two games to set the tone against a Stockdale team that traditionally has had Natalia’s # when it comes to both non-district and district battles.
Natalia will have more overall talent on the field, but Stockdale will have one beast in Clancy who the Stangs must find a way to slow down in order to have a good shot.
Natalia’s last win vs. Stockdale was at home in 2019-2020 when the Stangs defeated the Brahmas 31-21.
Kick-off is set
The Brahmas and the Mustangs will square off this coming Friday at 7:30 p.m. at Mustang Stadium. Coach Martinez and the Mustangs are asking you come out, pack the stands with blue and white and make this a true home-field advantage in a huge showdown as the Mustangs continue their quest toward their first district title since 1989. Come early, be loud, wear blue and cheer on the Stangs!
By Eric Smith
Staff Writer