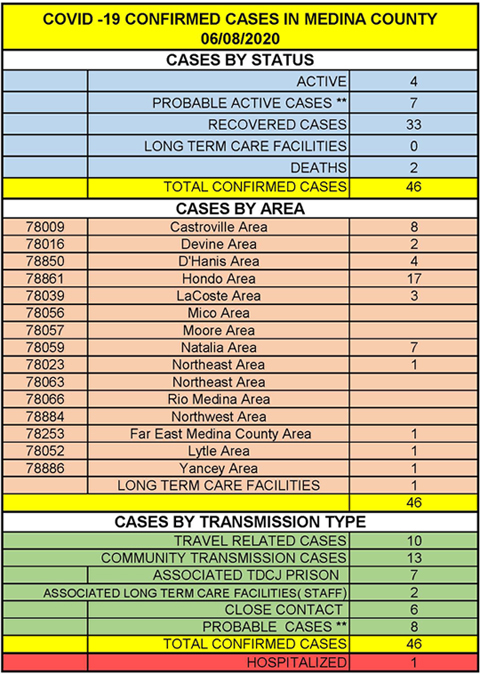 The Natalia area now has 7 cases of COVID (some confirmed and some classified as probable). There are a variety of reasons that some cases are considered probable. Four of the new Natalia cases are members of the same household.

The Castroville area is now up to 8 confirmed/probable cases of COVID. The LaCoste area now also has 3 cases.

The Hondo area still has the most cases locally at 17 as of Monday, June 8th. 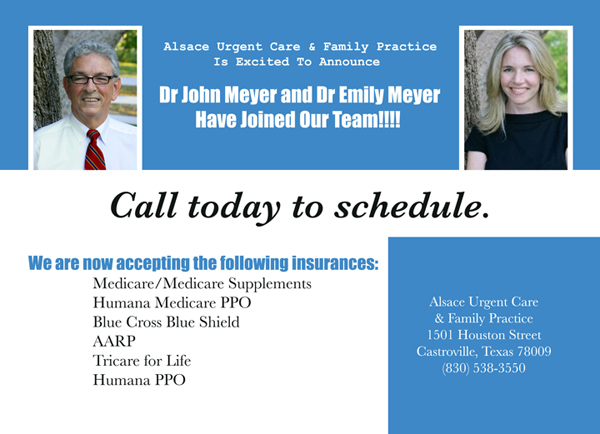 The following is a breakdown of the new local cases in our local communities by zip code.

On June 4th, one confirmed case and two probable cases were reported in the 78009 Zip Code, related to close contact.

On June 1st, one case was reported in the 78009 Zip Code, and is believed to have contracted through travel outside the County within Texas. A second new case was also reported 78861 Zip Code associated with a TDCJ prison staff member

In regards to using up to 25% of the $1.6 million dollar COVID relief grant that Medina County received, Judge Schuchart stated, “I am meeting with our grant administrator and county auditor today to see what our options are. So I should have a firm answer by next Monday.”

Schuchart added, “every city should also apply for this grant, as it is available to every city and county in Texas.”

The amount cities and counties are awarded simply depends on the number of residents.

As of this Monday, nursing homes in the county were completing the required COVID testing.

“Officially, today, as of Monday June 8th, the numbers of prison offenders who have COVID will not be counted on our Medina County Charts,” stated Emergency Manager Keith Lutz. “However, the staff at the local prisons who have confirmed COVID cases will be counted on our charts.”

“One of the reasons for this is that the data of confirmed cases in the TDJC prisons in Hondo does not come back in a timely manner to us. Many of these new cases, for example, were discovered in the strike force testing done on May 20th–over three weeks ago. There is a disconnect between the two state agencies, TDJC prisons and DSHS. Until DSHS has an official count, we don’t have an official count. So I believe that’s one of the reasons the state is asking us not to include the TDJC numbers in our County count,” Lutz adds.

The number of cases in the prisons like the TDJC Ney and Torres Units located in Hondo will be reported on a separate dashboard.

As far as the 100+ new cases reported in Medina County prisons this past Saturday, June 6, it shouldn’t affect any future graduations.

“The prison numbers don’t count in our county numbers now, so we should be fine following the governor’s orders right now,” Judge Schuchart said.

You can see the number of prisoners who have confirmed COVID cases as well as staff members at the following link. Look for the Ney and Torres units to see local prisons located in Hondo. https://txdps.maps.arcgis.com/apps/opsdashboard/index.html#/bcfcf5a35b524be597968e49766642b4

Break down of Prisoner offender cases in Medina County as of 6/8/20: