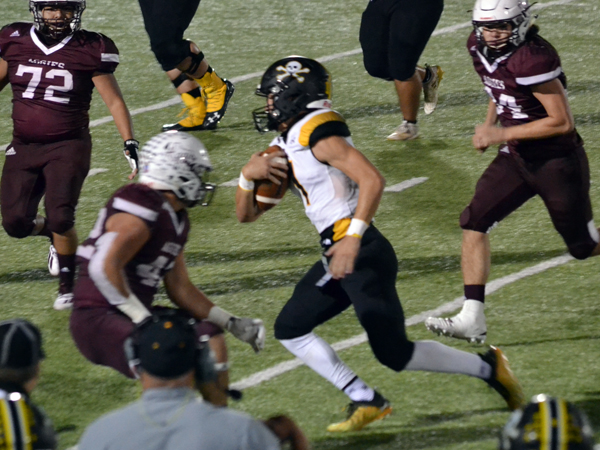 The Lytle Pirates traveled to Poteet for their opening district game. The Pirates played a spirited game, but penalties and mistakes resulted in a 26-14 loss.
Poteet got on the scoreboard with a 26-yard pass. The PAT was missed leaving the score 6-0 with 6:25 remaining in the first quarter.
Pirate Malakai Castro returned the kickoff 45-yards to the Poteet 25-yard line. The drive was stopped when the Pirates lost a fumble on the 12-yard line with 2:03 remaining.
The Lytle defense held this time on their 38-yard line as time expired in the first quarter.
The Poteet defense intercepted a Pirate pass early in the second quarter to stop another Pirate drive.
Once again, the Pirate defense rose to the challenge and stopped the Poteet offense. The Lytle offense got rolling with a 42-yard pass from quarterback Carson Aldridge to Mark Cantu.
The Poteet defense stiffened and stopped Lytle with 3:29 remaining in the first half. The Aggies scored on the last play of the first half. The PAT once again was missed leaving the score at the half Poteet 12, Lytle 0.
Lytle received the second half kickoff to start the third quarter. Lytle failed to move the ball and had to punt. A hard hit by Pirate Albert Aguilar caused a Poteet fumble which was recovered by Bubba Solis. 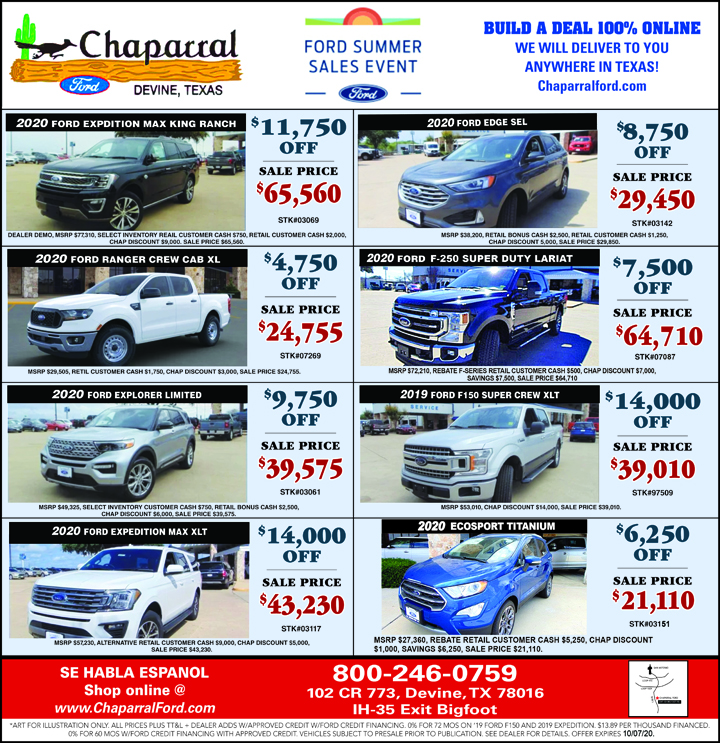 Once again Lytle was in a great position to score, but an interception ended the drive. The Pirates held once again giving the ball to the offense. Lytle gave the ball back to Poteet on a fumble on the Pirate 12-yard line. The Pirate defense held once again as a Poteet 4th down pass was incomplete.
Lytle could not move the ball and were forced to punt. The Aggie punt returner caught the ball on the Lytle 40-yard line and sailed down the field for a touchdown. This time the PAT was good bringing the score to 19-0 at the conclusion of the third quarter.
In the fourth, the Pirate offense began to roll. First a 12-yard pass completion from Carson Aldridge to Daniel Aguirre followed by a 9-yard completion to Zakry Placido. Then a 12-yard run by Mark Cantu followed by a 37-yard pass from Aldridge to Placido. Aldridge would cap the drive with a 7-yard run to the end zone. The PAT by Jason Vega was right down the middle bringing the score to 26-7.
The Pirate on-side kick was recovered by Poteet. The Pirate defense forced Poteet to try a 32-yard field goal. The kick was wide left giving Lytle the football with 1:25 remaining.
Aldridge got the offense moving with a 31-yard pass completion to Mark Cantu followed by a 7-yard pass to Aguirre. A 15-yard penalty by Poteet moved the football to the Aggie 32. Aldridge found Cantu in the left side of the end zone to complete a 32-yard touchdown pass. Once again, the PAT by Jason Vega was good bringing the score to 26-14.
The Lytle on-side kick was recovered by Poteet. The Aggies ran out the clock and come away with a 26-14 victory.
The Lytle offense was led by both passing and rushing leader Carson Aldridge. Mark Cantu was the leading pass receiver followed by Zakry Placido.
The Pirate defense was led by leading tacklers Deven Caldera, Rylan Wagner and Bubba Solis. Solis also had a fumble recovery.
“We played another physical game, we’re proud of our effort we came up a little short on the score board,” said Coach Robert McConathy.
A special thanks to the Lytle cheerleaders who kept the Pirate spirit the entire game. Finally, a hardy thank you to the Pirate fans who stayed the entire game.
Lytle will host Marion next Friday. Hope to see all of you there.