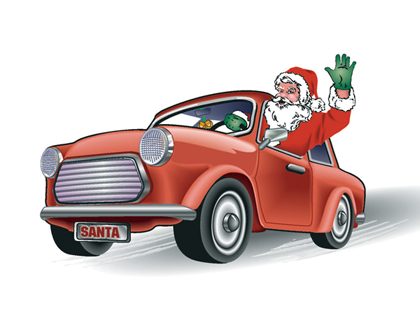 The City of Lytle is hosting a fun and festive Santa’s Vehicle Parade this Saturday, December 12 instead of the Annual Santa’s Hayride this year. Mayor Ruben Gonzalez, with the help of the city secretary and police chief, has put together a safe venue for Lytle and our surrounding communities’ residents. “By keeping folks in their own vehicles, we will be able to do our traditional Santa’s event, but in a modified way. COVID can’t stop Santa’s cheer!”
The parade is designed to be one you participate in by vehicle, rather than watch on the sidelines, enjoying the beautiful lights and decorations of the city from your vehicle on the parade route as Santa leads the way in group tours.
It will be on Saturday, December 12 starting at 6:00 p.m. from the Lytle Community Center. Cars will line up at the Community Center. The route was selected by the number of lights and decorations on display.
It is an escorted parade by Santa on a fire truck!

Participants are invited to go to the community center where they can join in on the tour; they will line the vehicles up by groups. Then each group of vehicles will be escorted by Santa and the police department through different locations in town.
The City of Lytle is also having a Christmas decorating contest for both residences and businesses.
They encourage everyone to join in the fun and help decorate and light up the city in preparation for this year’s Santa’s Vehicle Parade set for this Saturday.
“Everyone is invited to join Lytle in this holiday event. The more fun we can bring to the kids the merrier,” said City Secretary Josie Campa.
Parade goers are encouraged to line up at the community center. Several tours will take place. According to Richey Priest, Lytle Police Chief, it is customary for the tour to make it around the parade route several times in several shifts just like the hayride events of the past. They will escort the first line up of cars through the route and then come back for the next line up of cars, several times as usual.
People participating in the parade are encouraged to decorate their vehicles and those judged the best will receive prizes from local businesses. No trailers or people allowed in back of pickups. Everyone must remain in vehicles. Please don’t gather in large crowds and as always observe CDC guidelines.
Only normal vehicles allowed; passenger capacity must be followed.
Judging will be done the night of the parade. The vehicle contest winners will be awarded that night.
Prizes for business and residence decorations will be awarded at the January City Council meeting.
Parade Route
“We will leave the community center on Priest Blvd. and head south on Main St.
From there we will turn left onto McDonald St. (the road in front of H.E.B.) and when we reach the new traffic light at the IH-35 access road we will turn south (right), and then make a quick right onto Lytle-Somerset St. (the road between Taco Bell and McDonald’s).
When Lytle-Somerset dead-ends into Somerset St. we will take a right and head to Main St.
At Main St., we will take a left and head south on Main.
At N. Prairie St., we will hang a right and cross the railroad tracks.
We will make a left-hand turn and head south on Adams St., follow it around until the first right onto Houston St.
We will take Houston St. until we reach N. Prairie St.
At N. Prairie we will take a left and follow it out until we reach FM 2790 N (by the First Baptist Church).

At FM 2790 N. we will turn left, back towards Main St.
We will turn right down Blume Dr. and follow it until it comes out back on FM 2790 N.
We will turn right off of Blume Dr. and cross the railroad tracks at Main St.
We will turn left and head back north on Main St.
The vehicle parade will be disbanded at McDonald St. and Main St. (by Lytle City hall).
All the vehicles will be directed to turn right on McDonald St. and head towards H.E.B”, said Richey Priest, Chief of Police and Fire Marshal.
Parade features will include:
1 – Santa will ride on fire truck to lead the parade.
2 – Santa Claus will also be along the route to wave to kids in parade.
3 – Little Caesar will also be along the route for entertainment for kids riding in parade.
4 – Burger King will make their first Lytle appearance the night of the parade, will be at Burger King on FM 2790 east.
5 – Chuck Wimer will be along the route singing for the parade goers.
6 – First Baptist Church will have live nativity.
Prizes have been donated so far from: Little Caesar’s, Taco Bell, Sonic, Burger King, Mayor Ruben Gonzalez, The Devine News and HEB for Best Decorated vehicles.
By Kathleen Calame
Publisher