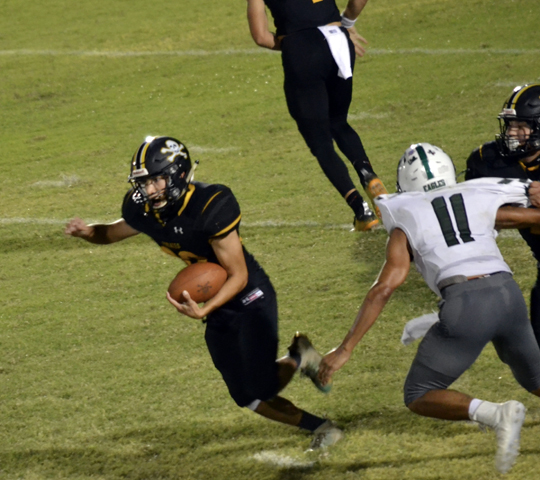 The Lytle Pirates won their non-district contest with Luling Friday night overcoming multiple penalties and miss scoring chances. The Lytle offensive line, consisting of Kody Villarreal, Kasen Boyd, Roberson Harold, Jonathon Cantu, Brenham Sevier, and Diego Garcia-Hernandez, controlled the line of scrimmage the entire game which produced long runs and long pass receptions.
Lytle scored first on a 5-yard run by Justin DeLeon. The PAT by Daniel Aguirre was good giving the Pirates a 7-0 lead with 4:11 remaining in the first quarter.
Lytle scored again on a 62-yard run by Justin DeLeon. The PAT was wide leaving the score 13-0 with 1:30 remaining in the first quarter.
With 1:32 remaining in the second quarter Lytle scored another touchdown on a 32-yard run by Quen Syma. The PAT by Aguirre was successful bringing the score to 20-0.
Just when the Lytle faithful were sensing a rout, Luling scored on 7-yard run aided by 20 yards in penalties by the Pirates. The PAT was successful bringing the half-time score to 20-7 in favor of the Pirates.
After a great half-time performance by the Pirate band both teams scored touchdowns in the third quarter. Luling scored first at the 5:15 mark on a touchdown pass. The PAT was good bringing the score to 20-14.
Lytle responded on a 3-yard touchdown run by Carson Aldridge with 2:09 remaining. The PAT by Aguirre split the uprights bringing the score to 27-14.
Lytle opened the fourth quarter scoring with a 68-yard run Mark Cantu. The PAT was wide leaving the score at the 9:39 mark at Lytle 33, Luling 14.

The Eagles responded with a 10-yard touchdown run with 6:57 remaining in the game. Lytle appeared to stop the Eagles 2-point PAT attempt, but a pass interference penalty gave the Eagles new life. The time the 2-point PAT was good bringing the score to Pirates 33, Eagles 22.
With 3:49 remaining in the game, Luling scored once again on a 51-yard touchdown pass. The PAT was unsuccessful leaving the score 33-28 in favor of the Pirates.
Lytle was unsuccessful in trying to run out the clock giving the Eagles a first and 0 on their 38-yard line with 1:28 remaining. Now was the time for the Pirates to make a defensive stand. The wildest play of the game occurred when the Luling quarterback fumbled the snap from the center. Pirate, Sebastian Flores scooped up the football and rambled 38-yards for a Lytle touchdown. The PAT was unsuccessful leaving the score Lytle 39-28 over the Eagles.
On the Eagles next possession, Pirate Mark Cantu broke up a fourth-down pass. Lytle took a knee to end the game 39-28.
The Pirates were led on the offensive side by the great blocks of the interior line and runs by Justin DeLeon, Carson Aldridge, Mark Cantu, Malakai Castro, and Quen Syma. Leaders on the defensive side were linebackers Bubba Solis, Deven Caldera, and Rylan Wagner. Caldera also intercepted an Eagle pass to stop a Luling drive. Malakai Castro and Bubba Solis both broke up Luling passes to stop Eagle drives.
Lytle will travel to Poteet for the first district game of the season Friday, September 25th. I hope to see all the Lytle fans there.
By Bill Herring