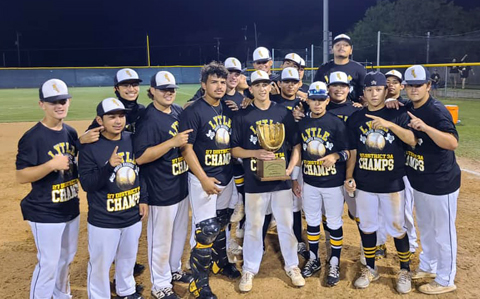 The Lytle Pirates were able to claim the Class 3A, 27-3A District Title Monday night claiming a 3-2 come-back victory over rival Natalia. After trailing for six innings of the game, the Pirates were able to produce two huge runs in the 6th to starve off the up-set to the Mustangs as both teams prepare for playoff action this week. The district title was the first on the diamond for the black and gold since 2014.
The Mustangs were able to score in their opening at bat, as Gavin Martinez started off the rival battle with a single up the middle. Gavin then advanced on a ground out by Fabian Ruiz before scoring on a double by Luis Buentello.
This lead would not only with-stand a number of innings, but also a rain delay before things resumed over 40 minutes later.

Natalia added their second run of the game in the top of the 4th inning vs. the black and gold. Natalia used Wyatt Owens getting hit by a pitch to start things off. Owens used a pair of passed balls and a wild pitch to give the Stangs a 2-0 lead.
Lytle made a pitching change in the 3rd inning and put in Justin DeLeon who did a phenomenal job on the mound throwing heat for the Pirates. On the opposite, Natalia’s Joseph Blanquiz did a great job on the mound thru 4.2 innings pitched as well before being relieved by Sonny Rymers then Manuel Garcia. Both pitching staffs were backed up by two defenses that made a number of great plays throughout the night.
Lytle scored their first run of the game in the bottom of the 5th inning. Alex Ramos got on thanks to being hit by the pitcher, before watching Brenham Sevier and Justin DeLeon go down swinging. Ramos scored thanks to two throwing errors and a stolen base to put the black and gold on the scoreboard.
Lytle finished off the Stangs with a big 6th inning. After watching Mark Cantu go down with a K, Logan Wilson was walked. Lytle followed this up with a single by Zakry Palacido, a single by Caleb Wood and two throwing errors allowing the Pirates to take a 3-2 lead.
Lytle was able to hold Natalia scoreless with two big plays defensively in the 6th and 7th enroute to the 3-02 victory.
Both squads finished with three hits each in the game, but five defensive errors proved costly for the Mustangs.
On the Mound: Natalia- Blanquiz 4.2 pitched, 1 hit allowed, six Ks and one run scored (Not earned); Sonny Rymers pitched .2, allowed two hits, walked one, struck out one and allowed two runs; Garcia pitched .2, allowed no hits and struck out one.
Lytle- Carson Aldridge pitched 2.0, allowed three hits, walked one and allowed one earned run. DeLeon pitched 5.0, allowed 0 hits, walked five, struck out seven and allowed one earned run.
Offensive Hits: Gavin Martinez, Luis Buentello and Xavier Vasquez accounted for the hits for Natalia. For Lytle, Caleb Wood, Justin DeLeon and Zakry Palacido accounted for the hits.
Defensive Put-Outs: Natalia- Navarro 8, Garcia 4, Rymers 2, Ruiz 2, Blanquiz 1, Ruiz 1. Lytle-Sebastian Flores 7, DeLeon 4, Wood 3, Palacido 2, Mark Cantu 2, Alex Ramos 1, Logan Wilson 1, Carson Aldridge 1.
Bi-District Playoffs- The Natalia Mustangs will battle the 28-3A Champion Yoakum Bulldogs this coming Friday, April 7th at Kenedy, Tx. Game one will begin at 4:00 p.m. with a 2nd game to follow 30-minutes after. The game 3 if needed would follow Saturday at 11:00 a.m.
The Lytle Pirates will get the 4th seed Industrial Cobras this coming Friday at Coastal Bend College in Beeville at 7:00 p.m. Game two will follow Saturday at 1:00 p.m. with a 3rd game if needed to follow.
By Eric Smith
Staff Writer