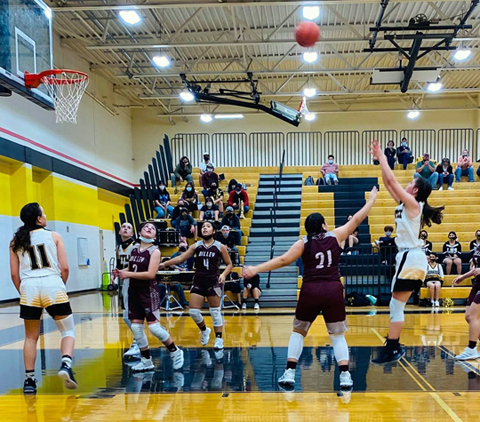 Now with six district wins behind them and one more game left in the first half of district, the Lady Pirates are on track to take their district undefeated. They played Karnes City last night. The Badgers were 4-1 going into the game. “We have a big district so we have to stay focused with so many games left to play,” said Coach Lori Wilson
Facing Dilley on Jan. 5th, the Lady Pirates won 81-20. The Lady Pirates “held Dilley from scoring in the first quarter and were up 26-0. The second quarter the team did not play well only scoring 13 points but after halftime they refocused and scored 42 points in the second half. In the seven years I have been the basketball coach here in Lytle the girls have never scored more than 80 points. This team seems to amaze us each week setting records and leaving legacies,” said Coach Wilson.
Caylssa Sevier 27 points, Noelia Medina 15 points, Fuzz Hutton 14 points, Cadee Martinez 12 points, Kylie Mask 7 points, Abby Moreno 4 points, and Alex Naeglin 2 points.
Friday night against the Poteet Aggies, the Lady Pirates pulled out all of the stops and won 76-9. Forcing 48 turn overs and 27 deflections, the Lady Pirates never let down no matter how big their lead grew. They held Poteet to one point in the first half and 8 in the second half.
Mask (Career High) 17 points, 6 assists, 5 steals, 5 deflections, 1 charge. Medina 16 points, 2 blocks. Sevier “had a season high with a Quadruple with 15 points 15 rebounds 10 assists and 11 steals,” reported Coach Wilson. Hutton 9 points, 9 points, 8 rebounds, 8 defections, 12 steals. Moreno 7 points, 7 rebounds. Katara Whitfield 2 points. Clarissa Ramos 1 point.
The Lady Pirates are scheduled to play in Poth on Friday, at home against Natalia on Tuesday, and them Cotulla on Jan. 22nd.
By Dicy Chambers
Sports Writer