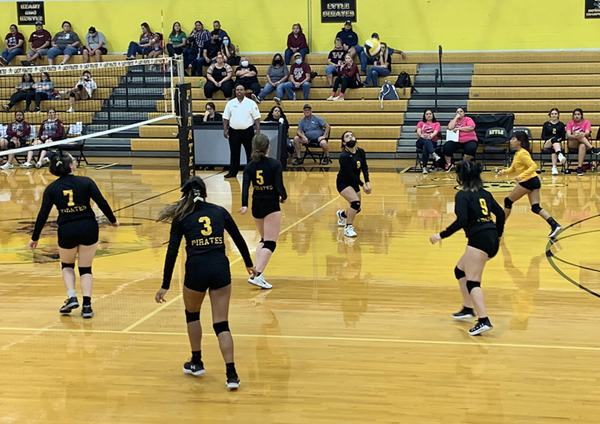 The JV Lady Pirates faced two tough teams last week and after losing both games, the team has fallen to 5-12 overall and 3-9 in district. The JV team has just two games left, West Campos on Friday and at home against Cotulla on October 22nd.
Playing in Jourdanton on October 12th, the JV Pirates put a newly learned serve receive, they practiced the day before, into action against the Squaws. “The improvement showed immediately. The Lady Pirates fell to Jourdanton 25-15, 25-15, but performed much better than they did during their previous meeting,” said Coach Jay Tope.
Friday night Lytle “started strong Friday at home versus Dilley, but faded as the match went on, resulting in a 25-22, 25-8 loss to the Lady Wolves. Communication and hustle were not as strong as in previous matches, but this was a great learning experience for the girls as they move forward. The JV Lady Pirates play West Campos on the road this Friday, hoping to right the Pirate ship and get back into the win column,” said Coach Tope.
By Dicy Chambers
Sports Writer