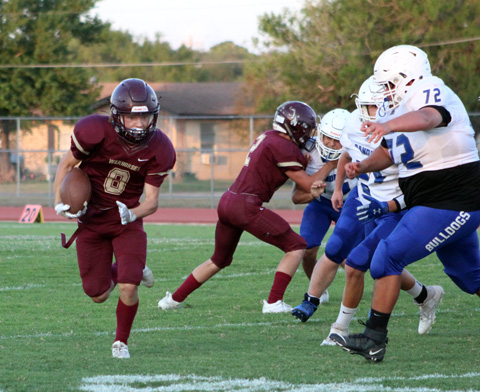 With the JV Horses allowing the Bulldogs more than ten yards on only one possession through the entire 40-minute ballgame gives just a little insight to the total domination Devine had over Bandera in their 48-0 blanking. The Warhorse defense also had three interceptions.
“We played very well,” Coach Heath Poppe said matter of factly. “Our defense was on fire all night and our offense moved the ball at will. I was more than happy with all of the players’ effort and attention to detail, even as the score got way out of hand.”
Devine scored quickly to open the game. Only 1:22 off the clock, and the Horses had already covered seventy-five yards and produced seven points courtesy of a 30-yard run by Elijah Sanchez and a booted extra point by Caden Hanson.
A little over three-minutes off the clock later, Jaiden Burford ran 30 yards for another six and Hanson added his second point after attempt to boost the Warhorse lead to 14-0. A Luke Friesenhahn sack that forced a Bulldog punt set up the scoring possession.
In keeping with the “quick score” mentality, Devine’s Jonathon Weinkam burst in the end zone from 9-yards with 2:39 still to go in the opening frame. Hanson kicked through his third consecutive extra point to provide a 21-point first quarter. A tackle for loss by Jack Schneider and a Hanson interception initially set up this drive.
After forcing a Bulldog punt, Brandon Martinez capped off a four-play Devine drive with a 27-yard run with 8:51 to go in the second quarter. Horses now led 27-0.
Devine scored their final touchdown of the first half on an 11-yard Noah Fernandez run. Hanson hit extra-point number four to give the Horses a 34-0 lead going into the break.
The second half produced two more scores for Devine. The first was a 3-yard run by Aaron Bonilla after a Weinkam interception and the second came on a Friesenhahn 9-yard run courtesy of yet another Weinkam interception. Hanson converted both extra points to make him six-out-of-seven for the night.
Sharing the wealth
As you might have, or might not have, noticed seven different Warhorses scored touchdowns on their total of seven for the night. Coach Poppe “sharing the wealth” amongst his ball carriers has been one of his long-standing traditions.
“The backs all work during the week, and it’s great to see them all rewarded on games that get out of hand quickly,” Poppe somewhat stated. “What makes it easy is that all of my backs are talented and deserve the opportunity they get.”
Scoring summary
DEV—1st, 8:38, 30-yard run by Elijah Sanchez. Extra point Caden Hanson, 7-0.
DEV—1st, 5:29, 30-yard run by Jaiden Burford. Extra point Hanson, 14-0.
DEV—1st, 2:39, 9-yard run by Jonathon Weinkam. Extra point Hanson, 21-0.
DEV—2nd, 8:51, 27-yard run by Brandon Martinez. Extra point no good, 27-0.
DEV—2nd, 1:36, 11-yard run by Noah Fernandez. Extra point Hanson, 34-0.
DEV—3rd, 5:37, 3-yard run by Aaron Bonilla. Extra point Hanson, 41-0
DEV—4th, 8:37, 9-yard run by Luke Friesenhahn. Extra point Hanson, 48-0.
By Jerel Beaty
Staff Writer