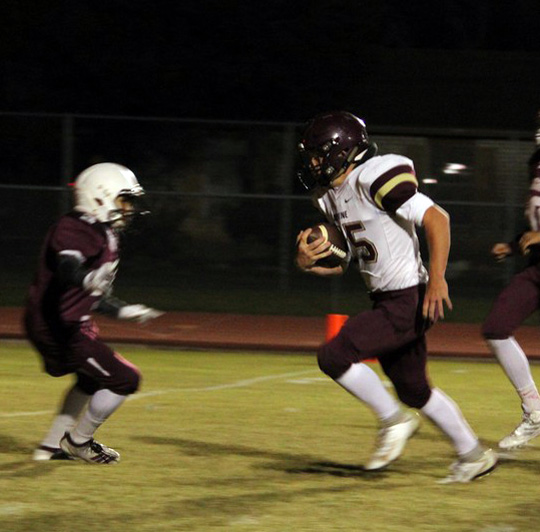 Whether you are into high scoring offenses or more of a defensive-battle type of fan, you got the best of both worlds Thursday evening at Warhorse Stadium. Devine’s JV put 60 points on their side of the scoreboard and while the Horse’s defense allowed the Poteet offense only 6 points in their convincing win.
Scoring for the Warhorses were Hayden DuBose on a 70-yard run to give Devine a 6-0 lead early in the game. Marcus Rodriguez followed on a 65-yard run. Others scoring included Jaiden Burford on a 27-yard run and Gabriel Lopez from 35-yards out. Dubose broke free for a long kickoff return touchdown, Blaine Davis scored on a 20-yard run and Aiden Zapata finished things off with a 37-yard run of his own.
“Great effort by a combined group,” said defensive signal caller and special team coach Scott Taylor. “We had several players get more time last night than in many of the other games. The special teams came up with big returns and several recovered fumbles. Hayden DuBose had a 75-yard kickoff return for a touchdown. The line backing core of Robert Ramirez, Nick Ortiz, Aaron Saenz, Blaine Davis, and Zachary Rico played well. I’m looking forward to another good week next week.”
“The offensive line did a great job last night,” said line coach Juan Gonzalez. “We were on a rotation of three different groups all night and each group picked up where the other had left off. We rotated well, got everyone in, and just kept creating running lanes. We are very proud of the kids’ maturity to handle the rotations and play their best. After a rough start and not able to convert on 4th down, sophomore Outlaw Walker intercepted the ball to set us up for our first touchdown of the night.”
By Jerel Beaty
Staff Writer