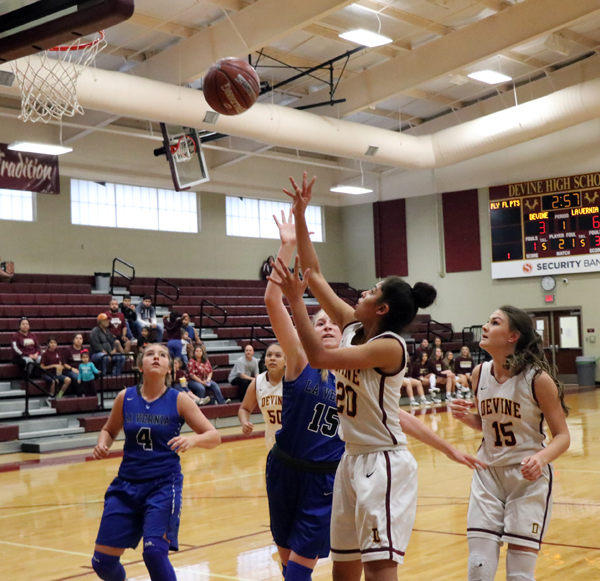 Winning 52-21 over Pearsall, the JV Arabians are now 2-2 in district and 9-7 overall. With district now half over, the Arabians will have to push hard to earn a winning district record. Last night they played in Hondo and will host Carrizo Springs Friday. Next week they will finish their season with Crystal City on Tuesday and Pearsall at home January 7th.
Outscoring Pearsall 12-3 in the first, the JV Arabians lead by Kaydi Yeats with 5 points and Kendall Marek with 4. Continuing to push hard in the second Yeats sank 3 three pointers and Rebecca Mares and Cece Elias each had 4 points to end the half 28-5.
Pearsall was able to score 5 points in the third but did not come close to matching Devine’s 15 points. Mares lead with 6 in the third and Allie Dugosh had 6 in the fourth. The game ended with Devine on top 52-21.
Emily Cruz 2, Mares 10, Marek 11, Andrea Rios 2, Yeats 9, Joselyn Guajardo 1, Dugosh 6, Elias 9. Q1 12-3, Q2 28-5, Q3 43-10, Q4 52-21. FTP 56%.
By Dicy Chambers
Sports Writer