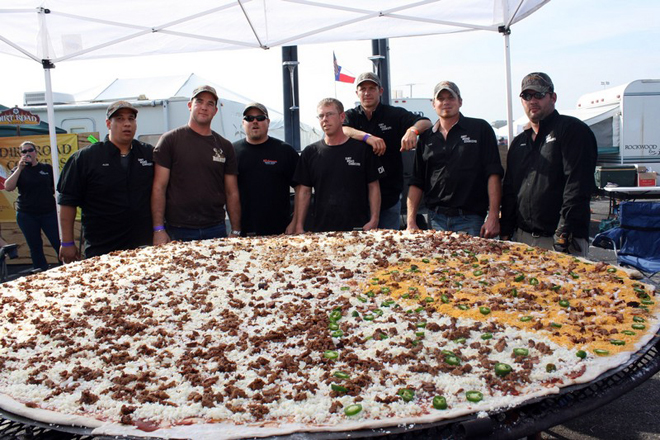 A Medina County boy, Kurt Oefinger and wife Christine travel all over the place cooking their amazing 8 foot pizzas, on a specially designed BBQ pit. But that’s not all….an 8 ft kolache and 8 ft quesadilla are among some of their other crazy fun creations. Kurt shared the story of how he got started and the many places it has taken him and his family.
“The story of Dirt Road Cookers starts back in August 2007, after my Grandfather, Edson Oefinger, passed away,” said Kurt Oefinger. “To help with the mourning, my dad and I started to build a BBQ pit. This pit was 9 feet long and 2.5 feet wide, and it has a tray, at 2.5 feet x 6 feet, that slides completely out of the pit in one piece. After the pit was finished that following winter, we started cooking one brisket a week to serve friends that would come over and play volleyball on Sunday night. Occasionally a friend, Alex Rymers, would bring out a few 20” pizzas to feed the crowd.
“One night I had Alex bring out just dough and cheese to cook a pizza on our BBQ pit, this was a big hit with the crowd for the night. From this experience friends started to pass around the word about this huge pizza that was made, and we acquired a few other events with this huge pizza. After time issues started to occur with using a pit designed for brisket, not pizza. For us to keep cooking these amazing, large pizzas we needed a pit designed just for pizza.
“In September 2008, I started to design a pit that would be just for pizza. The question was asked many times about how big it would be, and the answer was always the same, “8 feet because you can’t make it any wider in order to travel on the road.” September 2009, I found all my important material to build my design, and spent the next year building and testing this new pit.

“My first pizza came off September 2010, and the 8 foot pizza was born. We started catering to family and friends, as the word was passed around more people found interest in Dirt Road Cookers. People have planned parties just to see the pizza being made and try it. Now we do numerous weddings, birthday parties, employee and customer appreciation parties. We have learned how to incorporate designs on the pizza for special occasions.
“Normally a brisket will be included as one of the toppings, and sometimes a dessert pizza will cover a section of the pie as well. We have gone as far as using Menudo as a topping, or even Barbacoa. For a CCA event we used trout to cover a section. We also have toppings that are very different like Nachos and Frito Pie, which are very good as well.
“From the first night of making pizza, my friend and I always talked about making a 5 course meal pizza. Two years into this 8 foot pizza experience we finally made one into the shape of a star. Each point had a different course, starting with tortilla soup, minus the water, next was a simple salad baked into the cheese, the appetizer was nachos without the chips, entrée was steak fajitas with A1 as a base and finally pumpkin pie for a dessert. As we had many team members around the pizza to make this creation we still didn’t talk about the center of the star, there was a little confusion but ended up with about 4 layer of cheese and 3 layer of pork sausage. The entire pizza was amazing.
“In 2013 the city of Hallettsville hired me to just bring my pit to them so they could make a large kolache for their kolache fest, we helped the professionals complete this masterpiece, but this year the professionals are taking a break, so we get to make an 8 foot kolache.
“But still the craziest thing we have done is make an 8 foot quesadilla, which includes making and cooking two 8 foot tortillas and then covering them with chicken and cheese inside. It took about 12 people and two 10 foot pipes to stack the tortillas. Our adventures have made it to the front page many times, made the news many times and also Dude Perfect and Texas Country Reporter,” Oefinger said.
As of today they have made 382 pizzas, 6 kolaches, and 1 quesadilla.
“When the small pit was built a good friend, Matt Leggett, got me interested into cooking at the San Antonio Rodeo Cookoff. For this event I chose a few good friends, Matt Leggett, Alex Rymers, Drew Kammer, Jay Iltis, Chris DeHart, Greg DeHart, and Warren Haby, which became the Dirt Road Cookers Team. In 2014 Christie Cox and I started dating and she was helping with most the pizzas from that point on. We have been married for over 3 years and have 2 kids, Holden (2 years), the oldest loves pizza, and John Ryan who is only 3 months and can’t have pizza yet.
“The pit is the shape of a circle with two wood fire boxes that heat/cook the pizza. The temperature needs to be between 350-400 degrees to fully cook a pizza. It normally takes about 30 minutes to cook. Constructing the pizza takes the bulk of the time at about 2 hours. We use six dough balls, each weighing 6lbs 10oz that are rolled out and pieced together with water. Usually, each pizza comes with four toppings (any toppings) and 30lbs of cheese! One 8ft pizza will feed 150 people.
“For private events, we teach customers how to roll out the dough as well as how to toss it to stretch the dough out. Depending on the crowd, we allow kids to toss the dough back and forth to each other over the pizza tray as a little contest to see who can make it go higher. Once all the dough is tossed and pieced together, we let customers help put on the toppings and cheese. Kids love placing the pepperonis on the pizza and creating their own design with them. As all of this is going on, we tell them how much of each ingredient is needed for one pizza and other fun pizza facts,” Oefinger adds.
Dirt Road Cookers can be contacted at (830)444-9678 or by email at kurt_oefinger@hotmail.com.