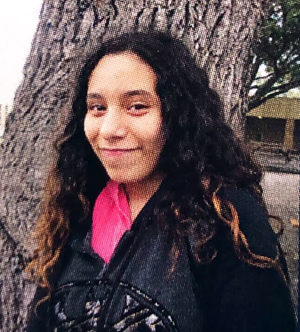 (Hondo, Texas, October 24, 2019) The Hondo Police Department is asking the public for assistance in locating a reported runaway.

Eva Marie Garcia, 14 years of age: 8-29-05, has been reported as a runaway juvenile and was last seen at her home in Hondo during the early morning hours of October 16, 2019. The Hondo Police Department has entered Garcia into TCIC/NCIC as a runaway juvenile. All information the Hondo Police Department has received at this point, has been followed up on and Officers have been unsuccessful in locating Garcia. Family has reported to have had no communication with Garcia since her disappearance.
Garcia is described as a Hispanic Female, 5-2 in height, 110 pounds, brown eyes, with curly brown hair that is shoulder length. Garcia may have dyed her hair pink according to received information. Information can be reported to the Hondo Police Department at 830-426-5353 or you can remain anonymous by calling the Medina County Crimestoppers at 1-800-FOR-CUFF. A tip leading to the location of Garcia could result in a cash reward up to $500.