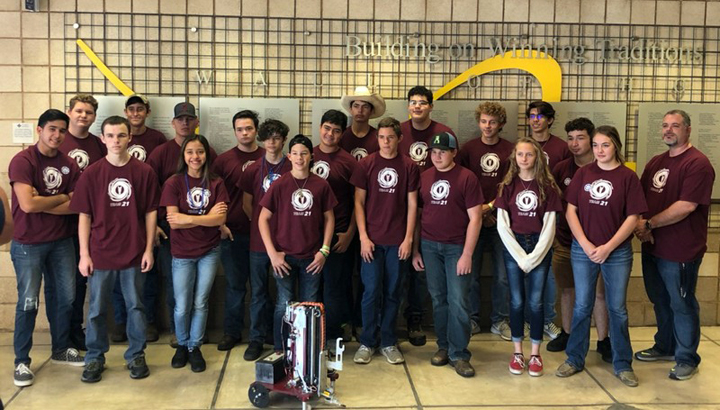 DHS UIL Robotics team competed in the San Antonio BEST UIL-Regional Competition, competing against teams from all over South Texas including teams from 6A Engineering and Technology Magnet Schools. They qualified for State in UIL for small schools and beat all but one team in the Robot Game Competition! The Devine High School Robotics Team placed 2nd overall. Also, our Marketing, Exhibit, Engineering Notebook, and Spirit & Sportsmanship teams combined to qualify us for the State UIL-BEST Robotics Competition in Dallas this December.

They competed in 8 qualifying matches and made it into the wildcard match after scoring 5 ZERO scores in a row. That means they competed in 3 matches that placed them in the top 16. They then won the wildcard and made it into the semi-finals against 16 other teams. They placed 3rd in the semifinals after three matches, which took them to the finals. In the finals they competed in 3 matches against 4 teams and ended up placing 2nd overall.
Not only did they make it to State, they won the award for best overall Robot Design AND the Most Robust Robot award.
By placing second, St. Mary’s University awarded us a $50,000 scholarship.