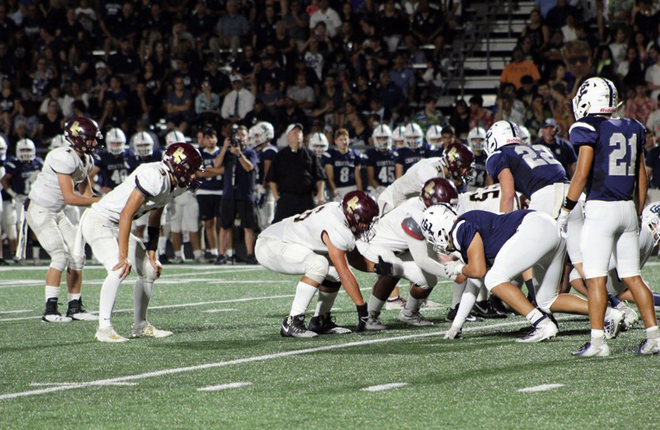 Hondo and Devine. Two of the most successful football programs in the state of Texas clash Friday night at Warhorse Stadium. Both teams enter the District 29-4A opener with identical 1-4 overall records, but each team begins fresh after coming off an open week to prepare for the race to a district championship.
For the Owls, pre-district competition saw them get blanked by Llano 35-0 before beating Lytle 27-12. Three consecutive losses to Medina Valley 41-14, Marion 35-27, and Gonzales 43-21 followed their sole victory of the season.
Devine opened their season shutting out San Antonio Kennedy 34-0 before dropping their next four contests to Somerset (33-28), Legacy (31-7), Pleasanton (41-26), and Central Catholic (47-34).
While the Warhorses played a more challenging pre-district schedule, that can be thrown out the window when these two teams step onto the field Friday night as both teams are now an identical 0-0.
Devine’s stats, while not gaudy have been on the upswing lately as the running game took a bigger priority in the Central Catholic ballgame. The Horses rushed 58 times for 333 yards. Their 1,281 total rushing yards is over 400 yards more than the Owl’s 806.
Where Hondo has an edge is in the passing game. Owl quarterback Brandon J. Garcia has completed 35 of 79 attempts for 605 yards and five touchdowns. Devine’s Isaiah Oropeza (20-51 for 253, 4 TD) and Brady Hackebeil (3 of 7 for 82, 1TD) have combined for 23 completions on 58 attempts and 5 touchdowns.
Trey Dickens is a dangerous weapon for the Owls when the ball is in the air. He has 11 receptions but has netted 269 yards and three touchdowns. He averages 24 yards per catch. Kaden Lentz is also a favorite target of Garcia’s. Lentz has 12 receptions for 102 yards and one touchdown. The remaining receivers have combined for 12 catches for 336 yards but only one touchdown between the seven that have caught passes.
Warhorse wide out Mason Burford has been the primary target for Oropeza. Burford has racked up 154 yards on 10 receptions. Burford also has two touchdowns. Justin Contreras (4-101, 3 TD), Buddy Santos (5-26), Xavier Contreras (1-26), and Brady Hackebeil (1-17) have combined for 11 receptions for 17o yards.
The Horses have implemented a rushing-by-committee approach throughout the first five games. Justin Contreras leads the team with 41 carries for 296 yards and two touchdowns while Oropeza has 44 rushes for 218 yards and five touchdowns. Santos (33-190, 1 TD), Leonard Pompa (39-190, 2 TD), Sergio Martinez (8-127, 1 TD), Hackebeil (27-126), Xavier Contreras (4-109, 1 TD), and Hunter Maxwell (4-37) have all carried the ball for Devine.
Hondo primarily shares the ball with two players. Dickens leads the Owls with 64 carries for 405 yards and four touchdowns. Garcia has rushed 71 times for 301 yards and three touchdowns. Joseph Tapia (18-82) and Carson Winchester (13-32) see limited action with the ball in their hands.
There have been some classic battles over the course of this long rivalry; Friday should show who is a legitimate contender for the 29-4A crown.
By Jerel Beaty
Staff Writer