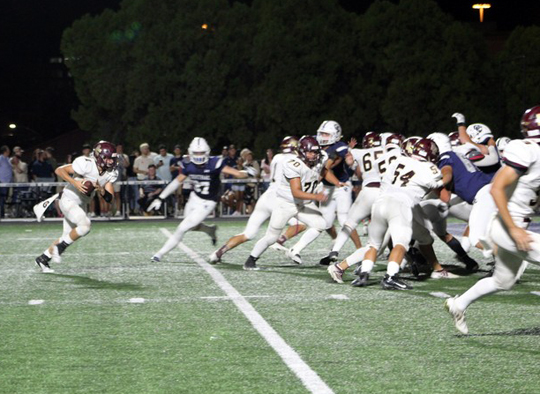 Devine Head Coach Paul Gomez breaks down Hondo on both sides of the ball as the Warhorses prepare for Friday night’s district opener:
“Hondo had a bye just like we did; we both had a week to get healthy enough to get back onto the field. Hondo Head Coach Ratliff and his staff will have them ready to play. Hondo returns some key players on offense including quarterback Brandon J. Garcia (#5), who returns for his junior year. He is a playmaker; the offense revolves around him. He does a good job running their offense. He is a big run threat so he can beat you with his feet as well as his arm.
Running back Trey Dickens (#22) is a big threat for them. He returns from a great sophomore year last year. He is a big running back with both speed and power. They also use him in passing situations as he has made some big catches for them this year. He will line up as a receiver as well as running back and fullback so we will need to know where he is. Joseph Tapia (#24) is also a good runner. He is very skilled and has looked good on film.
Their offensive line does some good things in the trenches. They have a good mixture of seniors and juniors up there that have really helped their run-game.
They have some good receivers that make plays when their name is called. Along with Dickens, Sheldon Luedke (#11) has made some big-time catches for them.
Defensively Hondo has a good unit that plays hard. Hondo runs a 4-3 defense. Mason Bragdon (#63) anchors their defensive line. He is a big, physical player who is tough to block. Tyler Deleon (#42) heads the group of linebackers for Hondo. He is an aggressive tackler that is always around the ball.
Tapia does a good job being a ball hawk on passes and coming up and making tackles at the line of scrimmage from the safety position. They do a good job of mixing up stunts and movement with their down lineman as well.”
Maroon out
“It’s going to be a very intense and loud atmosphere on Friday night at Warhorse Stadium. Hondo’s stands will be packed and ours will be packed as well. This is a great game to start out district play. We have to take it one day at a time and make sure we put the work in during practice to get us ready for Friday. That means a perfect effort for our players each rep in practice. Our boys have to be in the right frame of mind Monday-Friday. Each rep in practice has to be a GAME rep for all of us. We are playing for a Gold Ball so the stakes are high, and that is how it should be. This is why we play, for this time of the year. We are excited for the opportunity! Hope to see everybody there on Friday supporting this great group of young men.”—Coach Gomez
By Jerel Beaty
Staff Writer