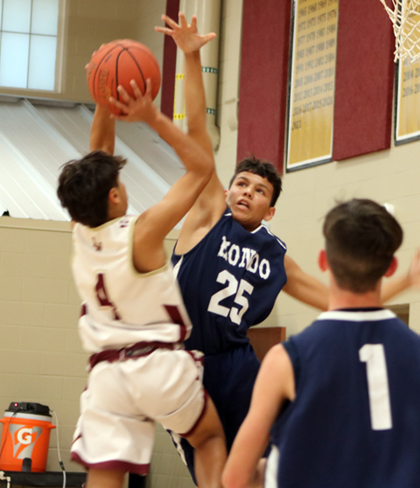 The Freshman Warhorses finished the first half of basketball season 9-6 and are looking good to taking on Uvalde on January 4th. The Wolves are their last none district game before the boys take on Carrizo Springs in their first district game.
On December 14th, Devine hosted Bandera and it was an intense game for Devine. Down -by one at the half, both teams came out determined to win. Bandera would gain the advantage 27-21 at the end of the third but Devine closed the gap and was just two points shy of the win. They lost 32-34.
Erik Baltizar lead the scoring with 9 points, Tony Saldivar had 2, Brayden Reyes 2, Donavan Dixon 6, and Saul Martinez had 2 points. Q1 9-11, Q2 16-17, Q3 21-27, Q4 32-34.
Friday night at home, the Freshman took on Boerne and it was a rough game. Devine fell behind in the first quarter and then could not catch back up. Boerne won 61-22.
Saldivar was on top of the Devine score board with 10 points, Reyes 1, Matthew Gomez 5, Dixon 4, Martinez 3, and Carter Faubel scored 9 points.
By Dicy Chambers
Sports Writer