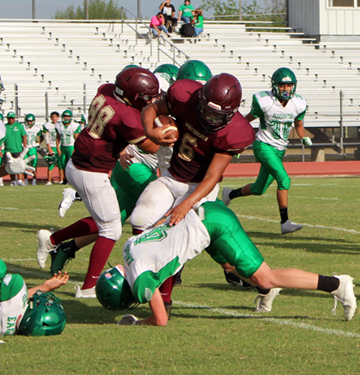 Devine’s freshman ran their record to 3-2 with a 32-14 victory in Pleasanton last Thursday. The Horses have this week off before playing at home against Carrizo Springs to open district competition on October 7.
Warhorse running back Tony Saldivar scored the first of his two touchdowns on a first quarter 3-yard run. Matt Gomez added the two-point conversion to give Devine an 8-0 lead.
Gomez stepped in front of an errant Eagle pass at Devine’s 40-yard line and returned it all the way for a 60-yard pick six. From his outside linebacker position, Gomez read pass and was on his way to the flats when he snagged his first interception of the season. Brayden Reyes ran in the conversion to boost the Warhorse lead to 16-0 with 4:32 to go before halftime.
Pleasanton inched a little closer with a touchdown soon thereafter but Saldivar scored his second touchdown on a 20-yard run with 0:20 left on the first half clock. Reyes added his second two-pointer to give Devine a 24-6 halftime lead.
The Eagles scored their last touchdown of the night in the third quarter to pull within 24-14, but Edward Perez tallied a 3-yard touchdown and added the two-point conversion as well to provide the final 32-14 margin.
Up next
The freshmen have a week off before district play begins October 7 at home against Carrizo Springs. Kickoff is set for 5:00pm.
By Jerel Beaty
Staff Writer