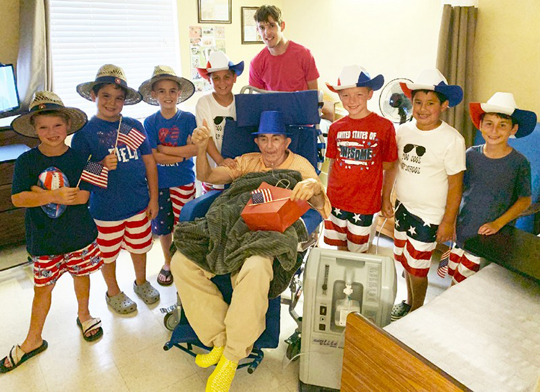 These kiddos took time out to visit with Eddie Hutzler at Devine Health and Rehab decked out in red, white and blue in honor of Independence Day coming up Thursday. They even brought Eddie a pretty new hat too! After visiting with Eddie and looking at all the animal pictures on his wall, he told the “danke schon”, which is “thank you very much” in German! Each one gave him a big hug as they said goodbye. They are MJ Lawler, Canton Urrabazo, Conner Guzman, Duke Wheeler, Austin Salas, Cord Lassere, Colt Flores, and Caleb Maxwell. Photo by Brigid Howard.
We celebrate American Independence Day on the Fourth of July every year. We think of July 4, 1776, as a day that represents the Declaration of Independence and the birth of the United States of America as an independent nation.