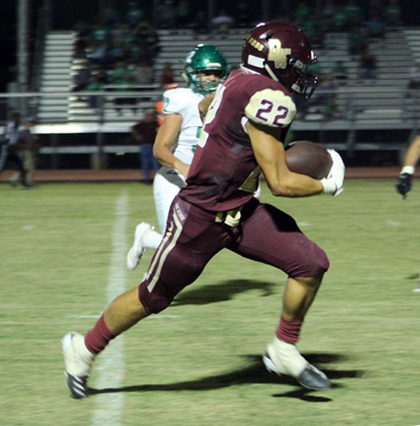 Turnovers and missed opportunities against the Pleasanton Eagles doomed the Devine Warhorses attempt to garner its second pre-district victory of the season. The Eagles took advantage of eight total Warhorse turnovers to claim the 41-23 victory in Devine last Friday night.
Head Coach Paul Gomez stated, “We can’t have turnovers and also have a chance to win a ballgame. We are just not taking what we do in practice into the game.”
The game started ominously bad for Devine. On the opening kickoff, the Warhorse returner initially was ruled down by contact before the officials gathered to overturn the original call and rule it a turnover. Pleasanton turned that unfortunate call into an 18-yard touchdown pass less than two minutes in the game to take an early 7-0 lead.
Devine moved the ball well at times but could not convert in a couple of fourth and long situations. The Eagles took advantage of another Warhorse miscue, turning it into a 12-yard touchdown pass with 1:36 left in the first quarter.
The Warhorses showed some fight however. Running back Justin Contreras got Devine on the board on a 24-yard run to pull the Horses within 14-6. Pleasanton had its own share of mistakes as well, turning the ball over to Devine on its first snap of their next possession.
Devine committed yet another turnover inside Pleasanton’s 25 yard line, thwarting an opportunity to possibly tie the game at 14 apiece. The Eagles capitalized several plays later on a 2-yard run to put them up 21-6 at the halftime break.
The Warhorses struck quickly after halftime on an Isaiah Oropeza 34-yard run. However, Pleasanton put the game out of reach by scoring touchdowns on their next three possessions.
Devine added a couple touchdowns late in the fourth quarter to narrow the gap. Contreras scored on a 62-yard pass from quarterback Brady Hackebeil and Sergio Martinez scooped and scored from 51 yards out on an Eagle blocked punt.
Gomez’s final thoughts.—“Things we do well in practice are not coming into the games with us. We made several mistakes not only on offense, but also on defense as well leaving some of their receivers wide open. We are just going to have to get back to the basics. We are going to be as simple as we can and let the boys play and live with what happens.
As coaches, we have to eliminate confusion among our players. We have several players coming up from the freshman and JV teams; it can be overwhelming because the game is so much faster on Friday night.
We are not going to give up on these boys and we will continue to pound that rock; eventually it will crack. Our boys are resilient, and we have to look at the big picture. We have to persevere and wholeheartedly believe that for every setback there is a greater comeback. We must have perfect effort and have faith in each other to overcome. Negativity will not break us apart; it will only make us stronger!”
Scoring summary
PLE—Nathaniel Acevedo 18-yard pass to Nathan Vazquez (Preston Thompson PAT), 10:06, 1st
PLE—Acevedo 12-yard pass to Daniel Valadez (Thompson PAT), 1:36, 1st
DEV—Justin Contreras 24-yard run (PAT failed), 4:46, 2nd
PLE—Valadez 2-yard run (Thomson PAT), 1:37, 2nd
DEV—Isaiah Oropeza 34-yard run (2pt conversion run failed), 11:04, 3rd
PLE—Acevedo 17-yard pass to Dalton Hobbs (PAT failed), 6:12, 3rd
PLE—Joel Arevalo 50-yard run (Thompson PAT), 8:38, 4th
DEV—Brady Hackebeil 62-yard pass to Contreras (2pt conversion run failed), 3:45, 4th.
DEV—Sergio Martinez 51-yard blocked punt return (Leonard Pompa 2pt conversion run), 1:42, 4th.
Up next: Devine travels into San Antonio to take on the Central Catholic Buttons on Friday, September 27. Kickoff is set for 7:30pm.
By Jerel Beaty
Staff Writer