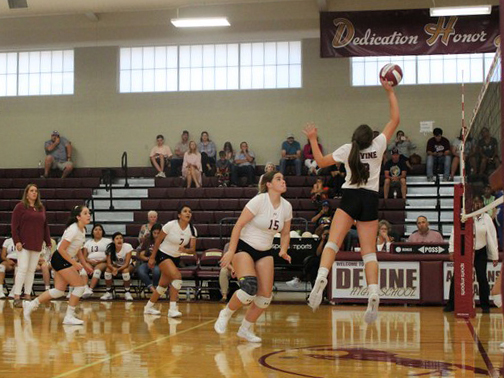 Vs Antonian
On the road at Antonian Prep, the Arabians fell in three sets 6-25, 21-25, and 14-25. “We didn’t come out with much fire in set 1, but we did in set 2 and put ourselves in a pretty good situation. We just got stuck in a rotation at the end and couldn’t get out. Set 3 we did some more great things but Antonian just had a little more fire power then what we have. The level of play in set 2 is the way I know that these girls can play, it just hasn’t been visible in a while,” said Coach McIver.
Kills: Bailey Oropeza 4, Gabby Rodriguez 5, Macey Hein 2, Aleyna Gerlach 2, Madison Pike 1, Jasmine Pompa 3. Aces: Allison Stevens 1, Hein 1, Janaee Wofford 1. Blocks: Pike 1. Digs: Stevens 5, Male Miles 5, Oropeza 1, Rodriguez 16, Hein 16, Wofford 7, Herrera 5, Pike 3, Pompa 2. Assists: Hein 16.
Vs Floresville
With the end of pre-district coming to a close, the Arabians struggled against Floresville on September 20 and fell in three sets 18-25, 7-25, and 23-25. “We just couldn’t produce offensively tonight. We had plenty of opportunities but just couldn’t connect. I thought we did a better job in the third set but just couldn’t pull it out,” said Coach Leigh Ann McIver.
Kills: Bailey Oropeza 1, Macey Hein 2, Aleyna Gerlach 2, Janaee Wofford 2, Madison Pike 1. Aces: Wofford 2, Leah Herrera 1. Blocks: Gerlach 1, Pike 1. Digs: Allison Stevens 1, Myra Miles 7, Oropeza 7, Gabby Rodriguez 17, Hein 12, Gerlach 4, Wofford 22, Destiny Moralez 5, Herrera 9, Pike 3. Assists: Hein 6.
This loss to Floresville puts the Arabians at 7-21 for the season.
The Arabians will play the Wild Cats this Friday in Carrizo Springs as their first district game. Tuesday they will play in Devine against Crystal City.
By Dicy Chambers
Sports Writer