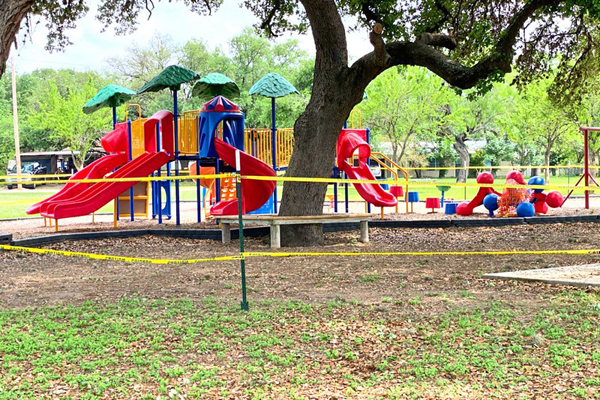 The extension is good until April 22, one day after the next Regular Council meeting scheduled for Tuesday, April 21.

A new daytime curfew restricts anyone under the age of 17 from being in a public place inside the City limits from 8:30 am to 3:30 pm, Monday through Friday, unless accompanied by a parent, guardian, or adult over the age of 18, or unless engaging in or en route to or from employment or volunteer work. The restriction is the length of a normal school day, and is intended to encourage Devine ISD students to stay home and complete their schoolwork.

Additionally, no one under the age of 17 can be in a public place inside the City from 10:00 pm to 6:00 am, unless accompanied by a parent, guardian, or adult over the age of 18, or unless engaging in or en route to or from employment or volunteer work.

Both Briscoe Park and Curcio Park are closed until further notice. All playground equipment, picnic tables, and benches are off limits, as the Briscoe Park pavilion. Briscoe Park’s restrooms will also be locked and unavailable for use, and though the walking track will remain open, residents who utilize it must maintain a social distance of at least six feet, and not gather in groups of 10 or more.

Recommendations were also made for the Devine Golf Course, including closing the clubhouse and pro shop, only allowing one player per cart, and removing all objects on the course that could be touched.

Additionally, businesses are recommended to sanitize all areas that are subject to frequent touching by the general public.

The amended declaration also includes a recommendation that the Devine Food Pantry find an alternate method of distributing food.

Thompson said he wanted to bring the Food Pantry’s operation in line with the recommendations from the San Antonio Food Bank by transitioning to curbside food delivery.

The Food Pantry is considered an essential service and is not subject to following the City’s recommendations if its Board chooses not to.

Flores said he had been told that patrons are being allowed inside to pick out their own food because of food allergies.

Thompson said he was concerned about the Food Pantry’s methods because it serves a specific need in the community, and that many of its volunteers are older and more susceptible to COVID-19.

“Based off of conversations with the county and of course reading things and conversations here at City Hall, we have to at least show as Council that we are actually making the effort, even if it’s only in a recommendation, to protect [people],” Thompson said. “We would prefer that they actually abide by it, but we have to play within the laws that have been given to us.”