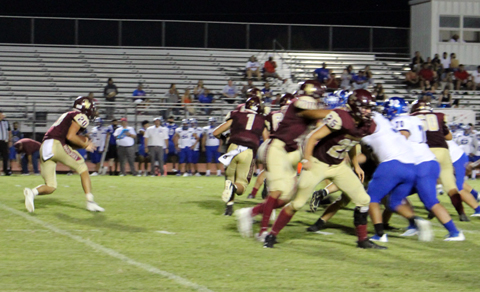 Straight off two decisive season-opening victories, the Devine Warhorses play their second consecutive home game Friday night as they take on YMLA. YMLA is in its first full season playing football as last year’s initial season was limited to two ballgames due to COVID.
YMLA lost 42-7 against San Antonio Randolph in their 2021 season opener before defeating Luling in a 6-2 baseball-type-score ballgame. The Lions take on Center Point next week before beginning District 14-4A DII action.
Quarterbacking the Lions offense is Aiden Delgado who is 9-17 on the season for 113 yards and one interception. Delgado’s primary receivers are Dezmin Whitaker and Brandon Mancillas. Whitaker has 5 catches for 54 yards while Mancillas has 2 for 34 yards.
Aaron Pinkey has approximately two-thirds of the rushing yards as he has run the ball 20 times for 98 yards. Other backs have a total of 45 yards between them.
In contrast, Devine boasts seven backs who each have more than 45 yards rushing on the season including two (Brady Hackebeil and Xavier Contreras) who have more than 150, another with 99 (Ethan Santos), and one more with 85 (Gabriel Esquibel). Expect these guys to significantly add to their totals this Friday night.

Gomez’s take
“Once again we face a San Antonio team that will have very good size and plenty of speed. Offensively they have a big line, a smart and athletic quarterback in Delgado. They have athletes everywhere it seems like as their running backs are big and fast and receivers are very athletic. We definitely look forward to the challenge and I know our boys will be ready. They are spread one back and two back offensively. Defensively they are a ‘split’ with good size down linemen and they have big, athletic backers. We are going to have to win the battle of the trenches and try to wear them out with what we do offensively. I am definitely excited for Friday Night!”
What is YMLA
YMLA is somewhat new to the high school football scene as they enter only their second year of competition. The school touts itself as the first all-boys public school in San Antonio.
The following information is a direct copy-paste from YMLA’s website.
The Young Men’s Leadership Academy is San Antonio’s first all-boys public school and offers a model of education that is backed by research indicating that boys and girls learn differently. The school helps boys achieve their highest potential by setting high expectations and emphasizing character, leadership and discipline. Each day begins with a firm handshake and continues with a positive message of encouragement in a daily assembly. At YMLA, our students are engaged in an active learning environment. Our 21st-century school design fosters dialogue, promotes collaboration and encourages creativity. We build social-emotional awareness through reflective thinking practices and daily meditation sessions. We are preparing today’s learners to become tomorrow’s leaders.
Kickoff time
Devine kicks off its second of three 7:00pm game times with next week’s game in Pleasanton also slated 30 minutes earlier than the usual 7:30pm.
By Jerel Beaty
Staff Writer