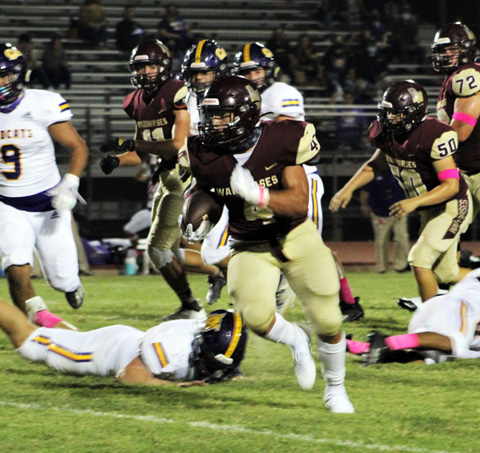 In case anyone was wondering, Devine vs Hondo is this Friday night at Warhorse Stadium. This game has the potential to decide who the district champion is as both teams currently sit atop the standings at 1-0. Coincidentally enough, both teams have identical overall records at 5-1 as well.
“It is going to be a great game with a playoff type atmosphere,” Head Coach Paul Gomez said in anticipation of the Horses upcoming ballgame. Two teams that will be battling it out to remain atop the district. Hondo has a really good team. Coach Cary and his staff have done a tremendous job getting their players playing at a high level.”
Hondo has a new man in charge of the football program this season who has changed up some of what Hondo has been known for in year’s past.
“Coach Cary brought the spread offense and that is a good thing for a quarterback like #5 who throws the ball with great accuracy, even on the run. His scrambling ability allows big plays to happen. He has really good targets in receivers #82, #3 who are good route runners and their big play guy is #11. They line him up everywhere. It also helps their fullback and tailback can catch the ball out of the backfield. They both have made some big plays in the passing game. They execute screens very well and their line does a good job keeping the QB protected. #22 is a big young man who can also do some damage on the ground. He has been their leading rusher for the last few years and he is tough to bring down.”
Devine has put up some really nice offensive numbers the past several weeks. The high-scoring Horses will be tested Friday.
“Defensively, Hondo runs the 50 defense,” Gomez stated. “Their defensive line is very quick and do a great job disrupting things. Their outside LB’s are very athletic and their inside backers do a great job of handling the inside run game. Their secondary does a great job with their scheme and have done well against some potent offenses.”
Special teams always seems to play a hand in tight, physical, championship-type ballgames. This one will be no different.
“They have one of the best kickers in South Texas so he will definitely be a factor,” commented Gomez about football’s third phase of the game. “He has made several field goals over 40 yards consistently and has the leg to make them from 50. He does a great job kicking off! They have recovered some of those when he kicks it high and to the sidelines in bounds but can kick it out of the end zone whenever he wants as well.”
Friday will be fun, no doubt. With a possible district championship on the line, Gomez is encouraging Warhorse Nation to show up and to be loud.
“It’s definitely going to be a battle on Friday Night!” Gomez said. “The team that is the most excited to play that night and executes the best will win. We can’t turn the ball over like we did vs Carrizo or it won’t be good. We have to come out this week with great energy and focus and prepare for success. Great players play great in big games so we all just have to go out there and be great! We are excited for the opportunity to play and blessed to be able to compete! Warhorse Nation needs to be loud on Friday night!”
By Jerel Beaty
Staff Writer